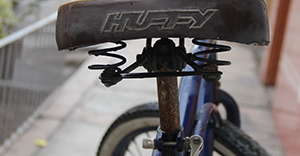 Today is World Car Free Day – or Dia Mundial Sin Auto, as they say at this end. Yesterday I met up with Octavio – the brains behind Lima’s Cicloaxion pro-cycling group – to get a heads up on the activities today in celebration of this globally recognized  event. Globally unless you’re in the UK, that is, where, in London, car-free day has long since been rebranded as Freewheel, Skyride  and now Prudential Ride London (sponsored by Prudential) shifted to the middle of August when there are less cars around to be more free of. Cycling in the UK capital has a strong dynamic with the British Olympic success, of course, that Brad Wag guy and London Victoria Pendulum – not to mention Boris Bikes and the long term effort by city-planners to both come up with funds for cycling and try and work out what to spend them on beyond bicycle parking stands. Around the rest of the country, solidarity with the world’s non-auto population is similarly played down: Only a handful of municipal authorities registered events on the World Car Free Day Events directory, a situation that, with the minimum of research effort, I find repeated year in year out..

Well, like a true Brit, then, I managed to miss this year’s Car-Free Day Ride in Lima – the meeting point in Parque Kennedy was too far for the meeting time of 10.30 am was too early and I had some unmissable chores to perform. Truth is, I could have gone for a short time if only my bike had been any good for the demanding Limeño street environment. Say what you like about riding a bicycle in places like Lima, good brakes is certainly a necessity and lacking, too, on my present machine which has a back-pedal brake. Just when you’re committed to a gap in the traffic and you know that Combi bearing down on you is gonna run it close, you need to know you can stop if you have to.

All of which means my present ride, a beautiful classic cruiser/coaster type thing, broken in at Black Rock City, Nevada where that Burning Man traffic did get heavy at sundown and the vehicles were pretty mutant, is going to be sold and its advertisement can be viewed here. I’m catching myself staring at it now remembering riding it for the first time on the Playa where stopping accurately is not essential. We brought it with us on our journey south because I loved its uniqueness – for me, anyway, something different to my usual bikes. God, that was a another world wasn’t it? That little festival of hedonism thousands of miles north and over two years ago, this Huffy- lump of metal switched hemispheres and made it from one desert to another. And the bike’s as cool as can be when the journey is a country lane down to the village store, a beach-side promenade or the leafy streets of Miraflores. In fact, I’m hoping that someone in Miraflores will take it. I can imagine this bike cruising up and down the Malecon, the wide avenues leading out to Barranca, Surco and San Isidrio – just not with me on it; I can not be trusted on a Burning Man bike (I have finally admitted) and we’re gonna sell it and get another.