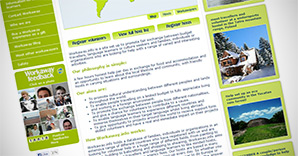 Social forums and volunteer community websites such as workaway.info can seriously augment your traveling experience, making for an easier integration and a way of supporting local and independent projects. It is one of those win-win situations: The host gets help and the guest gets a deeper encounter with a foreign country – and everyone benefits from the exchange of ideas and energies that occurs when you connect like-minded strangers together. These networking services are becoming so popular, and so appreciated, that their operators can make enough of a living to ensure their continued, successful work.

So it’s kinda like a win-win-win situation, really. It wasn’t like that, of course, back in the day pre-www, when we had to rely on word of mouth, pigeons, glass bottles and stuff for global networking of this nature – and as a result, life just seemed more black and white; you’re either on holiday or you’re working. That rare beast, the working holiday was even honored with its own term – the busman’s holiday. But now, after checking these sites out it’s like we’re all on a busman’s holiday. Life is a busman’s holiday. The distinction between work and play has been blurred for thousands of people who have chosen a more radical experience: We’re hooking up with workaway.info to help plan our return to Europe from South America – we’ll let you know how we get along.

Workaway has been around since 2002 but  really took off as a proper business over the last four years. They have registered hosts in 120 countries: We’re looking at Brazil and Argentina and the number of hosts we’ve seen is way beyond other websites we have looked at.  Sixty-one hosts for Argentina alone; from permaculture projects to a Patagonian cattle ranch; animal rescue centers, eco-villages, community kitchens and schools; and enough hotels and hostels that need looking after to solve the unemployment problem of a small country. It is truly one of those moments when you realize that life is too short and that there’s so much to do – but completely exciting to be at the precipice and see all these options before you. Just where are we gonna end up next?

David, who first volunteered while traveling in Hawaii in the early nineties and met enough like-minded travelers to realize the Workaway concept, tells me that they can’t say how many connections are made between host and volunteer on an average day.  Interactions come in all kinds of shape and size too – you might volunteer to help bring in a harvest, a short, intense experience, for example. You could just as easily be a host that needs someone to look after their farm through the lonely Arctic months. The Workaway office is getting thousands of messages back from the community, however.  In fact, more than one of them has thanked them for their contribution to a relationship forming from a Workaway connection and a baby being born! They’re doing something right, it seems.

Building on this success, the team at Workaway are currently launching a foundation which will enable both volunteers (aka Workawayers) and hosts to directly donate to some of the worthwhile projects that they have come across around the world. The future is bright for volunteer community websites and the clever people who use them…