Robbery on the High Seas Part 1 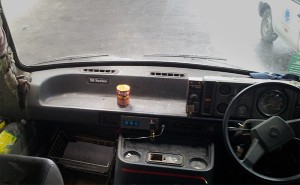 Colon is the city that the Americans built at the Caribbean end of the Panama Canal. It is here that we leave our truck at the port so that it can be loaded onto the ship and taken to Cartagena in Colombia. The process is pretty much straight forward: We have already arranged and paid for the service at the shipping agent’s office in Panama City and now another of their representatives guides us through the paperwork and delivers us to where we say goodbye to our home.

When we shipped our vehicle a couple of years ago from Korea to Canada, someone, somewhere, stole our 4 channel, 400 watt amplifier from inside a concealed cupboard. We don’t know whether that happened in Korea itself, as our truck waited to be driven onto the Hyundai ship. We don’t know whether it happened, instead, at the New Westminster port in Vancouver, when the truck was driven off and parked up for us to collect. Probably it happened at some point in the 21 day sea voyage by a bored and badly paid sailor.

So, of course, this time in the supposedly much more thieving-orientated culture of the Latin Caribbean, we are expecting the worse and securing our possessions as best we can. You see, the problem is, you have to leave your keys with the shippers so they can drive the vehicle on and off the boat – and our problem is that the interior of our truck is one space – a “walk-thru”, a bus, in fact, where the driver’s position is an integral part of the rest of our home. There’s no simple way to build a partition so what we do is put the really valuable stuff in the back where it can’t be reached and the rest of the stuff we cram into the shower and put a couple of locks on that. Between the shower and the front we chain up our two bicycles so that they block access into the living area for all except a determined fellow with an angle-grinder or a monkey. All our clothes, all the tools, gadgets, games, crockery and everything else that could fit in the shower is now also behind this barrier. It was sweaty work.

So then we got to the food; a few tins of baked beans, tuna, some spices and an expensive bottle of olive oil.

<<Come on, says Dunia, we don’t have to worry about the food, surely? They’re not going to steal that.

<<They’ll steal anything that isn’t bolted down, Dunia, I reply. Anything. They see it as their sea-faring right.

<<But the beans? They’ll take the baked beans? And so what if we lose a tin of beans?

<<Look, we paid thousands of dollars for all this – I’m not gonna let them take one dollar more.

We stood facing each other in a mist of sweat, the humid Hades heat obviously fuelling our conversation – one of the tins in question in my hand and Dunia brandishing another. The din of a container port thundered around us, the clock ticking down to when we must leave our precious to the obviously light-fingered and bean-hungry sailors and dock workers who were at this moment circling around us like vultures pretending to work. We were stressed, we hadn’t had nicotine in hours – we were angry and we were arguing about baked beans.

I began to feel a little faint and so I relented.

<<OK, we’ll leave the food where it is, behind the bicycle-barrier but not in the locked shower.

I replaced my tin in the cupboard but put it at the back behind a collection of plastic bags, thinking, well, it’s partly hidden but then thinking, shit, what if they steal the bags?

Dunia took her tin and placed it at the front, on the dashboard – in full view of everyone.

<<Dunia! I cried, what are you doing?

<<Andy. Calm down. For the price of a tin of beans we can do a little test to see whether this Colon to Cartagena shipping route is indeed a thieves’ paradise.

Yes, an experiment – I like them – we are, after all, a traveling think-tank researching our planet. The tin of beans stood invitingly; the bait on an otherwise bare dashboard and the only item that didn’t require simian assistance or power tools to be liberated.

So, we’ll see if it’s still there when we get the truck back in Colombia – I’ll write a blog post about it.

Shuttled out of the port, then, finally, deposited in downtown Colon in the midday, tropical sun, we stood blinking. Homeless. Two rucksacks to our names and a few litres of perspiration down. What now? I looked nervously around the decrepit urban landscape before me. Fetid, black drains, crumbling concrete – the buildings look like they hadn’t been maintained since the Americans had built them and left. We picked our way through the poverty to find a spot where we could recharge our energy and plan how we would get ourselves to Cartagena.

Colon has a very bad reputation –  you’ll read about the scary streets in the guidebooks and overlanders’ blogs… We’d like to point out here that even after hours of anti-thievery activity in the truck, hours of driving around dirty, chaotic ports looking for the right office and then thrown, mostly-naked and dehydrated into the middle of the supposedly dodgiest city north of the Darien Gap – we relaxed, refocused, and found we actually liked the place and would have happily stayed longer. Like one big, ugly industrial squat underneath the fascinating architecture, it was like the rougher parts of the capital, urban Panama without the tourists.  And it has free Wi-Fi broadcast on the streets – Internet Para Todos.

It isn’t robbery in Colon you have to worry about; not when first there is the general robbery of having to fork out thousands to get round the Darien Gap – The Price of Paradise. Then there’s the robbery on the high seas themselves. In Part 2 we’ll see if they went for the tin of beans…. Or worse.