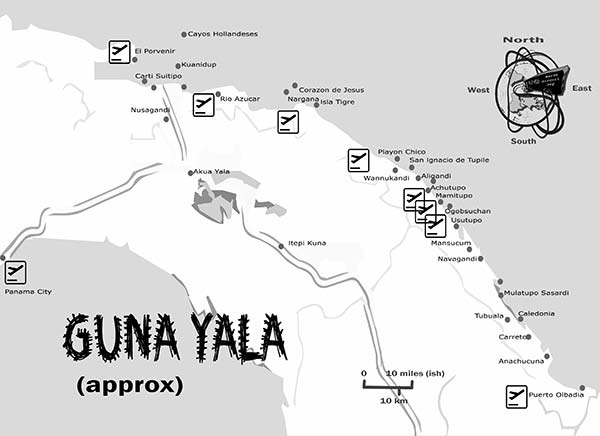 We had decided to get to Cartagena via the San Blas Islands, keeping step with our truck transported by container ship. This option is the danger option because it’s not at all certain that there are boats available and that you won’t be stuck on an island somewhere for days waiting. Not to mention the vagaries of the weather, running into cocaine smugglers or drunk captains with boats that sink. As it happened we got lucky and after a bumpy ride from Panama City by jeep, we were immediately put on a speedboat that was going all the way to the Colombian border. We weren’t really expecting this and we hardly had time to dig out sunscreen or waterproofs before we were speeding across the waves getting repeatedly burnt and then soaked. That ride, I hope, will forever be etched in my brain. Not just because it was fascinating, stopping at various islands to pick up and drop off Kuna passengers, but also because I’m not sure my back could ever put up with nine hours of slamming into wave after wave ever again.

That first day, then, took us from Panama City’s Magnolia Inn hostel to Villa Rosa hostel in Puerto Olbadia. The next few days we rested in Capagurna at the Posada del Gecko, checking to see when our truck might be arriving further north. After another speedboat from there to Turbo, we were on buses; first to Monteria – where we stayed in Hotel Tarada – and then, finally, to Cartagena – where we spent the next few days at Iguana’s House. Wow. Journey completed. On time and on budget. But never mind the exotic places we were passing through; the really interesting thing for me was (a) living out of a backpack for two weeks, (b) the joy of not having to pilot any of the vehicles I was traveling in and (c) paying money to share a room with strangers.

Seems like these hostels remind me of squatting a little. The communal kitchens with names on bags in the fridge; coming together in the lounge to watch the football; transient people you may never meet again; drug-fuelled sessions on the roof-top; you know, that kind of thing. Or, maybe, when I think about it, when I wonder at how many hostels I’ve been frequenting recently, in actual fact, I’ve been living in something like hostels for years…

Thinking about it even more: When I’m at home, I’m usually living in a big, communal squat and when I’m traveling I’m living in my own space, with my partner – a tiny bedsit on wheels that we don’t have to share with anyone. Kind of the exact opposite to everyone else. We met one guy on the way through the San Blas who kept banging on about how great Luna’s Castle in Panama City was. This infamous hostel attracts all the party-minded back-packers passing through and he was raving about the Scandinavians, Israelis, Italians and Brits he’d met there, not getting to bed until dawn most nights. Equally, in Cartagena, it was pretty good fun where we stayed – long term residents able to offer advice for the newcomers; the Colombian staff relaxed and eager to learn more languages and cold, cheap beer in the fridge. And now back in our tuck, on our own, self-sufficient and able to shut the front door on the outside world, I’d imagine that, in truth, our style of overlanding isolates us somewhat from our peers, cutting us off from all the other travelers who seem to travel as much for the spirit of camaraderie than for the experience of far off places.

So, yes, we finally got our truck back in Cartagena. Fairly painless procedure which involves relaxing in air-conditioned offices and bargaining with a street seller to rent his shoes for a couple of hours so that I’d be allowed into the port. Usually Latin American bureaucracy can be scary stuff but, for me, in Cartagena where it is hot enough to melt, I’m, like, sitting there, people-watching, catching some TV news and enjoying the artificially controlled temperature. Take as long as you want, mate, I cry. You can’t find the inspector to sign the blah blah permit? No problem, we’ll wait.

Part Three of Earthcircuit awaits us. We have driven up the nearest mountain, to Minca, to ponder our future and plan ahead in the beautifully green, cool and pleasant surroundings of this large and friendly village. And, to be honest, after the linearity of the Trans-Siberian and the northern half of the Pan American, with which the countries pass by as if they were on a conveyor-belt, we are a little bit lost – limited by funds and time indeed, but spoilt for choice with the possibilities of this vast continent that neither of us have ever been to. We have options. Left, right. Westwards, eastwards. Machu Pichu or the European Space Centre in French Guyana? After reading about overlanders who crowdfunded their travels – we have hit upon an idea, however: We’re going to auction off our future. Send us some money, tell us where to go and the highest bidder (and us) wins. I tell you what; we’ll give the 10% that would otherwise be taxed by kickstarter to your chosen charity and we’ll offer you our spare bed so that you can travel with us for a while. Or, no, unless you’re a squatter, of course, traveling with us might  just seem like dossing on the sofa at your friend’s apartment

And the beans? The baked beans that we left as bait in the truck? The test of honesty that we’d laid out for all the rough and ready men between Colon and Cartagena? Get this: