Will Our Next Dog Be Hairless And Peruvian?

The first time I saw these kind of dogs

was the blurry morning after arriving in Mancora, Northern Peru. I was coming back from the bakery and there they were stretched out between the market stalls and some fenced-off roadworks, blocking my way.

Hmm, what’s this, I thought? I had a camera on me and as I got it out, I made eye contact and they started growling. I put it away and squeezed past them, clutching the fresh pastries I’d bought. No treats for these guys then!

Not so much aggressive , more kind of like they just don’t have much time for strangers. I could understand that – strangers can be annoying sometimes – and I began to really appreciate these hairless dogs. They started to come in all sizes and with a wide range of hairstyles. I asked a restaurant-owner if I could take some photographs of her dog which I’d seen sniffing around earlier. She yelled “Draco” and this black, muscular thing like a jackal tinged with flames came bounding over a small wall and skidded to a halt before us, head turning sharply to take in the scene. Before I knew better I’d been calling them Devil Dogs, pointing them out as we drove south through Peru. Draco, she called this one, the restaurant-owner. Not Devil, Dragon.

This is an ancient breed; pre-Spanish, pre-Incan and possibly as old as any of the civilizations that existed here in Peru, judging by pottery remains and paintings that depict a wrinkled, rubbery dog. And looking around the old google seems to suggest that the Hairless Peruvian is of extremely ancient lineage. Genetic analysis of Amerindian dogs have found that 30% of their DNA came from Asia – a far higher figure than supposed given the catastrophic cultural changes during the European colonization. Yes, this means that that recognizable dogs may have traveled with the first humans from East Asia to North America 20-odd thousand years ago rather than being breed anew from indigenous wolves. Not only that – according to this report, they have found the same sequence of DNA, containing genes that regulate hair growth, in both Chinese and the Peruvian versions. In the past, similarities between Peruvian and Chinese hairless breeds was traced to the immigration of Chinese people that occurred when the slavery was abolished in South America. But a hairless dog may well have come via the arctic land bridge between Siberia and Alaska, thousands of years before. A breed that old? Definitely dragon. 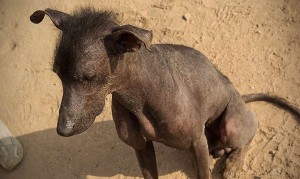 Why are they hairless, though? Why have they been bred that way? A common view is that the hairless mutation was allowed to flourish when, left to the demands of natural selection, it wouldn’t have. Whether you’re talking about Chinese traders, Aztec priests or the Peruvians today looking for a typical breed that symbolizes their heritage, the hairless pups have been artificially selected to survive. The FOXI3 mutation is part of a selection of genes that control development of teeth, hair, nails and teeth – and many of these dogs have reduced dentition to go with the higher risk of skin cancer. It is assumed that many pre-Incan people kept these dogs as a source of food – maybe these hairless dogs kind of looked cleaner, more free of parasites and bigger than a guinea pig. Also, they were (and still are) prized as hot-water bottles on legs, offering relief to ailments because they are much warmer to the touch than a coated animal. In Peru, another variety is the Incan Orchid dog which is the same thing but with mottled skin displaying patchy colors of pink or gold. These were highly prized by Incan nobility and kept indoors in rooms full of orchids, away from the sun. More recently there was a trend to use hairless dogs in cosmetic animal experiments until it was shown that, while  they might be more bald than a human, they were not suitable models for human skin. Multipurpose dogs anyhow – won’t bring fleas into the home and completely trainable for hunting, protection or just to look fancy.

Getting back to our bus, the only dogs around are in the pictures on our cameras – it sure feels strange, still, months after our own Vaga passed away. Especially now, we have slowed down, stopping in small towns down Peru’s desert coast. She would have loved all that sand. We can’t help but find ourselves at the gates of animal refuges or pausing for a minute or two in dog-exercise areas or at the pet store. There’s a bunch of dogs that are always hanging out on a roundabout on the way to Lima’s Customs Office – a trip that we’ve had to make a few times – and one time, a rare sunny day, I had to really resist the temptation to get off the bus and hang out with them. Ah, well.

Considering the dog as the pinnacle of human technological achievement means you are always going to be disgusted at the sheer waste when you see lots of unloved dogs around but first impressions for Peru say that dog-life here is pretty good. They generally look in good condition compared to their tropical relatives and less of them dead on the road compared to Mexico, say. Whether hairless or not, half of them are clothed in old sweaters or coats – protection against the chilly coastal winter as much as the cold nights in the highlands. Of course, such comforts are not enjoyed by every dog and a few charities and organizations have stepped up to the task of administering care for the dogs of impoverished owners. They also struggle to replace traditional methods of culling like mass-poisoning or drowning with a more humane approach. Such groups exist in Iquitos, Piura and Cuzco while in Lima we went to visit Animazul – a well-run animal refuge on the outskirts of the capital. In as big as city as this, it doesn’t matter how well the authorities sterilization programs or how accessible general pet care is; there are always going to be cases of abandoned or suffering animals. Animazul looks after 46 dogs at the moment and, when they can, they offer dog-care to the local area or support various community initiatives. Their base is in a valley between Cieneguilla and Pachacamac, Lima suburbs that are dry and hot away from the coastal fogs and municipal water networks. Just up the road is a Dog Hotel serving the wealthier folk downtown and we stopped by that too. It was strange to compare the conditions of these Miraflorean mutts – a few more blankets in their kennels and a bigger, greener exercise area than their more cramped and frugal brothers and sisters living at the refuge not far away. Along the way, we had passed many luxurious villas behind high brick walls – a hundred yards on and there’d be a collection of more humble homes, huddled together under corrugated roofs, hidden behind drying clothes or the dust clouds of passing buses… The different kind of lives for the same kind of animal. All of those animal welfare groups, by the way, are accepting donations.

So I find myself wondering how a Peruvian Inca Orchid dog would handle the European weather. You know, if a little pup or other managed to find a way on board the bus. Wouldn’t be the first time – we’re on the way home to Europe and we’re one dog down… I really appreciated their no-nonsense kind of attitude – the big ones, anyway; the toy versions are like toy dogs everywhere – they, for sure, had a Pariah Dog personality – a street surviving and intelligent. They might enjoy the absence of a strong sun back in Central Europe but they sure gonna look cold waiting outside the shop for me in  the winter time. I’m told that these hairless dogs will carry around their own blankets around from place to place, without being trained to and if they can survive the long march from Asia thousands of years ago, they must have qualities of endurance and hardiness… desirable traits for a traveling animal, surely…