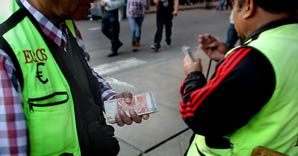 I thought I was being clever, checking the money they gave back to me in the supermarket or at the money-exchange place, seeing if it was counterfeit or not. That is until I saw everyone else doing it too. You hand over your notes for products bought or services supplied and the cashier checks them, a little rub between the fingers, a quick flick under the UV light, holding them up to the light and then gives back some change whereupon you do the same, going through the same pantomime. At first it seemed like, ‘hah, if you think my money is counterfeit – how do I know that yours isn’t?’ And then it dawned on us after a few weeks here in Lima, Peru: no one does know and everyone checks the money – on both sides of the cash register.

The story is that plenty of the cash in circulation here is counterfeit. Further, that Peru is now the main source of counterfeit dollars in the world – even 20% of counterfeit dollars found in the US originate from this new counterfeit capital of the world. It seems to be the result of a perfect storm: The suppression of criminal activity in Colombia has delivered the enterprise further south which, historically, always had a lively forgery business in the semi-industrial suburbs of Lima, the capital of a country, I am told, that didn’t even have a law against forging foreign currencies. Between the two is Ecuador which has dollarized its economy and provided an easy market for counterfeit greenbacks.

I get to thinking about what happens when your note is found to be a forgery. It happened to us once, paying for a meal in a small restaurant in a dusty town. The waitress had this pen and scribbled a mark on the twenty-sol bill. The pen traced a faint orange line and she announced it a counterfeit and unacceptable, showing us how on other bills the pen traced no mark at all. On this occasion we shrugged our shoulders and paid with another note and I think, to be honest, we lost track of the dodgy one, certainly passing it on to someone exchange for something.

So I imagined that this forged note wound up in the possession of someone very poor; someone at the end of the cash chain, accepting crumpled notes, maybe one or two a week, in desperation. Someone without a magic counterfeit-detecting pen and who isn’t in a position to say, ‘hey, this note feels a bit funny, can I have another?’ What happens to them, here in Peru, when they take their last note to the bank or some office where they have to pay for the electricity, or whatever, and it turns out to be forged and the official behind the desk confiscates it and gives nothing in return? They lose the last of their money, is what happens.

It could happen you go into a bank with a hundred dollars and change them up to new sols. You walk away, counting the cash and then go back to split up one of the hundreds they gave you. They take the note. Give it a rub, under the UV and hold it up to the light. Shit, it’s fake. Shit, you just lost a hundred.

We got talking with some money changers hanging outside the banks at San Miguel La Plaza, a sprawling shopping mall between downtown Lima and the airport. Perez showed me his stamp that he uses to mark every high denomination note that passes through his hands and his test of authenticity. It is a seal of approval and kind of ironic too. Not willing to trust the high-tech security features, holograms and raised, intaglio printing, the note in question is only genuine if it has been stamped with a $2 stamp that anyone could get made up in ten minutes down the market. So anyway Perez doesn’t use the stamp much these days. He says that the latest counterfeit notes are quite easy to feel as soon as you rub them in a certain way. At the moment there doesn’t seem to be many counterfeits in circulation. $24 million was seized in 2012 – nearly $16 million in the first half of 2013. That’s just the US dollars. The government has also been pushing an awareness campaign that focuses counterfeit detection down to three easy steps: “Look” for the watermarks, “feel” the ink and “tilt” against the light. Not that the Peruvian public need encouraging. The counterfeits are still there and you still have to check every one. Perez’s colleague, Beto, came over and showed me a fake dollar bill that he’d been given the day before. It was a hundred and it looked good until they showed me how the green ink felt different to a true hundred-dollar bill. Pretty subtle – and I’m not sure I would have noticed it. Then they told me to smell it and, yes, it did have a different, kind of gasoline smell. Great, another step in the pantomime performed at every cashier in Peru; sniffing the notes.

Once upon a time, street money changers were often blamed for the proliferation of fake currency although, of course, it is the big demand for dollars that fuels the counterfeiting industry. Perez has to wear a yellow jacket identifying him as an official trader allowed to tout for custom in designated areas – and these days the traders are the victims too. Beto had been given the fake $100 bill at the end of a long, chilly day standing around outside in the Lima winter – he’d fallen for the scam I had imagined might happen the other way round. A guy (who no one could describe) had bought two hundred dollars, receiving from Beto, a hundred-dollar bill and five twenties. Beto had thought that everything was done for the day – and making to go home when the guy turned round and asked for the hundred bill to be changed into five twenties. It had been a long day standing around outside in the Lima winter and Beto was tired. That’s when the guy must have swapped over the real note that he’d just been given for the counterfeit note now sitting in Beto’s hand. ‘That’s why we stamp them,’ Perez says.

Out one night, we stop at an ATM to take out some cash and I find myself automatically giving the notes a quick look, feel and tilt. And then a sniff, yeah, I look round to see no one was watching that. No one around too, of course, to complain to if I did detect a counterfeit note spat out from a machine – and, thinking about it more, no one around to check them if you pay at some kind of automatic cashier like they have in supermarkets in the West. Money is intentional, surely, a symbol of something intangible, a promise on paper and, without the human check, its actual authenticity becomes more about what the person, the only human around, ferrying the money over between machines, thinks. If they think it’s a real dollar, it’s a real dollar.