A Ruin Around Every Corner 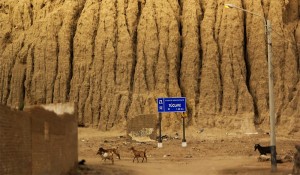 Nothing quite so ruined as Peru ruins. Not only does the country boast a good variety of landscapes, there are also the mysterious remains of forgotten cities scattered throughout. In the mountains, there are forts on every hill, tombs hidden high up the valley walls and archaeological complexes at the end of torturous tracks. In the coastal deserts there are massive earthworks and adobe pyramids by precious river mouths – even in the coast desert cities, even in downtown Lima, there are huacas hiding in the shadows of new apartment blocks.

Which is why we are not so surprised to read about a couple of construction companies being responsible for the destruction of a pyramid last week just outside of the Peruvian capital. Commercial interests have long since taken up the slack from the drop in looting, in the battle that Peruvian archaeology faces.

It’s all very depressing because, for me, Pre-Incan Peru is a true nation unknown. Before we crossed from Ecuador, I was expecting to see some solid Incan sites, thinking of the photos I’d seen of the Incan heartlands around Cuzco – I knew nothing of the many cultures that existed in the rest of Peru or the civilizations existing before the Incan and Spanish conquests. I never expected to visit pyramids that were older than Stonehenge and read about their influence on peoples as far as Mexico. This history should have so much to add to the world story – instead it seems to be in danger of being bulldozed, neglected or stolen out of human knowledge.

The northern desert of Peru is broken where a broad flat of green crops meets the sea. From here climbs the road up into the Andes and towards the jungle. Lambayeque Valley has always been a well-populated area as we saw at Túcume – a complex of adobe pyramids centred round a strange, small hill known as Purgatory. Although impressive in scale, the adobe has badly deteriorated – they say it’s the largest pyramid complex in the world but the remaining mounds looked nothing more than the many hillocks that dot the dry, sandy landscape.  What we needed was something more solid and substantial. Even though I was glimpsing part of the forgotten civilization of Moche, I still hadn’t quite left that paradigm of something made out of stone atop a mountain; something like Kuelap.

Very little is known about Kuelap – either by the professionals, by the locals or, it seems, by the tourist trade that sends nearly everyone to Machu Pichu and hardly anyone here. Thought to be a fortress built by the Chachapoyan culture, it is being promoted as the main draw for the region of the same name. An incredible place, it is still mostly shrouded in gray clouds and overgrown with lively, green and wet vegetation and llamas. In the mornings it is mostly free of fellow visitors… 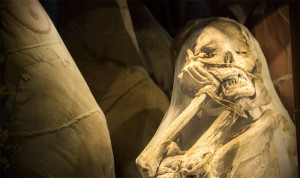 The regional map from Chachapoyas Tourist Information Office looks like the guy with the “sites of archaeological interest stamp” went a little crazy – there are places to visit marked everywhere and it would take easily a month to visit half of them.  Kuelap is just one of a thousand other forts, villages, buildings, temples, tombs and other artefacts that can be found in this area: A region where the Amazon jungle infiltrates the eastern Andean valleys; a mix of environments that fueled an active culture. Now you’d need a guide to get to most of them, while countless other sites lie scattered across hillsides and only visited by locals trying to farm the land.

It was after this rush of archaeology that we began to see Kuelap-style walls around every hill-top. It started on the drive south to Cajamarca where the gentler landscape, barren of trees, reveals rock cliffs and seams that look like they are made out of bricks. Sometimes you would see something ancient but ruined and there’d soon be a small blue sign pointing the way to an archaeological site of some kind. Sometimes not – but you imagine that the pile of stones was likely an artifact but they ran out of blue signs. The familiar pattern of hillocks started again once we reached the dryer lowlands and after seeing the massive, but well-deteriorated, complexes around Trujillo, we realised that most of these hillocks, rising out of sugar cane fields and looming over houses, were probably the remains of some man-made, adobe monument or other.  We were passing through the lands of the Chimu culture – who seemed just as prolific as any other  Peruvian culture with their powers of  construction.  It really did seem like, in Peru, there is a ruin around every corner.  Stopping randomly by the side of the Pan-American, I realised I was even pissing on one.

Need somewhere to park for the night? No problem, just a bit further on down the road, we found one gaff, called Paramonga, an interesting little fort built 800 years ago, completely deserted. There was a quick dusk, night fell and we had a whole little castle thing all to ourselves.  The next day we stopped at a site belonging to the Sechin culture. Here, a few kilicks outside of Casma, is a good example of the renovations that are sometimes applied to archaeological sites. Without them, the place would be, yes, just another funny pile of mud and stones in a muddy, stony landscape. But with them – a repair of the light-relief sculptured wall here, a little brick-work on the stairs there – the ruin comes alive to a point where you can imagine the bustling temple in busier times. 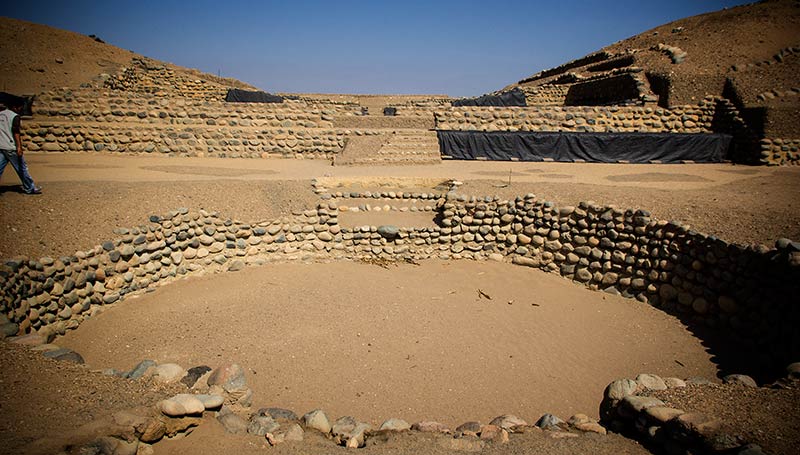 For the third day in row we had yet more archaeology action further south still towards Lima. By this time the little blue signs were whizzing by, thick and fast, on left and right, the road passing likely hillock and brick-like cliff after another.  Well, except for Caral, the oldest city in the Americas: We missed that turn, coming to a random breakfast stop at the entrance to Bandurria instead – a smaller, more recently excavated site that is thought to be even older than the place we were trying to get to.

So many sites and ruins, surely the Peruvians can afford to do away with a few? A couple of weeks before the El Paraiso complex is butchered by bulldozers, we were learning that Bandurria gets threatened regularly by its neighbors who covet some of the land. The ancient ceremonial site crowns a beautiful bay, a lagoon and a desert oasis; an excellent place for a temple and an even better location for a hotel. So we were already a little bewildered when we heard about El Paraiso – by the thought that this magnificent site could so easily be vandalized. Some of the oldest constructions in all of the Americas, no less.

We are newly arrived in Lima now, the big city is still sparkling, still slightly shocked by that first landing in Miraflores  – a place that looks more like the Californian Bay Area than Peru. The difference with the rest of the country could not have been greater – except for the ruins, of course, that continue to persist even here, surviving urban property booms and the new rises of Lima’s growth. Turn a corner here, just as in the rest of the country, and there’s more than likely a huaca of some kind – even if the only way they could make it pay was by turning it into a little park for all the surrounding apartment dwellers. 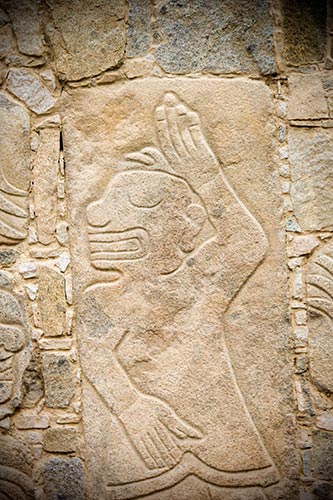 Which is the problem all along – having to make these archaeological sites pay their way out of neglect, demolition or robbery.  In reality, a host of issues:

1. You might as well start with the sheer size of the subject; hundreds of thousands of sites scattered over a vast and difficult terrain.

2. And you can throw in the modern day realities of land pressure and poverty – the relentless spread of humanity filling up every gap and space in the cities and into places like the coastal deserts that once protected their hidden prizes, the land grab in the mountains that ploughs land that had been long left alone and illegal mines that honey-comb hill sides.

3. You also have to wonder about the lack of organization and how efficiently any of the Machu Pichu Millions trickle down to safeguarding other sites, even popular and accessible ones, like Bandurria and El Paraiso.

4. And then, I suppose, you’d be thinking about what is going on behind the scenes if there is such a lack of organization: Just months before this crazy story of youths driving diggers into a pyramid at the behest of a couple of property companies who say they own the land, the guy from the Ministry of Culture himself stood at that same pyramid and announced substantial grants to develop the site as a monument of national significance and heritage.  The same people warned at the time, “archaeological sites in urban areas are always at risk, either by invasion of unplanned urban frontier.”  Hmm. What’s happening?

Peruvian solutions exist to these problems. The El Paraiso project was to benefit thousands of the local people, most of whom suffer poverty, unemployment and a lack of facilities. This was the great loss – the plan to safeguard this vulnerable complex of ruins, bringing development and opportunity to the surrounding area, will need to be looked at again now that someone’s flattened the thing.  Happily, this approach of developing an archaeological site in tandem with the local community is being repeated successfully in projects all over the country alongside creating inner-city parks and repairing the structures enough to attract more visitors. But the question is, after the El Paraiso fiasco, are we doing enough?