Into The Amazonas Through A Rainbow Doorway 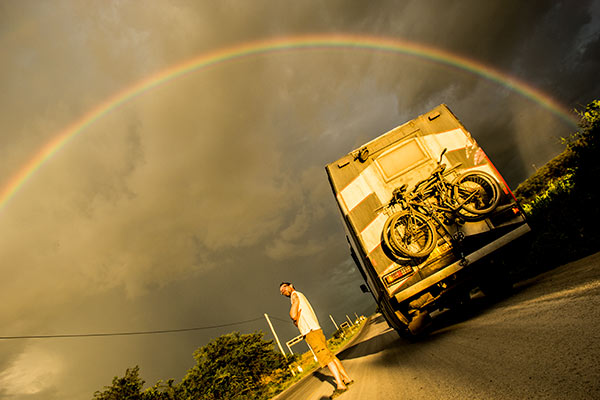 It was raining and getting dark and, for the past hour, the road had been passing through canyons and gorges, under punkus, by pongos and sometimes just inches above violent rapids. We were desperate to stop but the terrain afforded very little habitation – let alone free overnight parking spots. Instead there were lots of landslides – from a few loose rocks fallen on to the asphalt, presaging the rocky deluge to come, to the landslides so big and vast that basically the mountain had moved and the road had changed course.

That’s it, the tropical dusk was over like a switch – it was now pitch black, we had just driven an exceptionally twisted section, the road hugging  the noisy and turbulent river and we wanted no more. A line of buildings appeared around the next corner – their fluorescent illumination offering us plenty of room to stop in front of them. This was Villa Nueva. The New Town. A laid back place, as we parked up, took refreshment and introduced ourselves to the inhabitants. It did look kind of new, this place, I wondered, so where was the old town? We were told that we would more or less drive over its ruins in the morning on our journey east. One day, a half dozen years before – a day as overcast, threatening and wet as it was now – the swollen river forced through the narrow gorges and destroyed the old town, dragging most of it downstream towards Brazil.

Water, funny thing, right? The way it goes round and round. Sometimes as mysterious and invisible as evaporation from the oceans or transpiration from the forests. Sometimes on its way back down to the sea, not so subtle. Further up the road is the world’s fifth highest waterfall close to the village of Gocta. It is not a spectacular, massive waterfall but it is very typical of this area and demonstrates rain water’s potential energy turned kinetic as much as anything else in this crumbling, jagged terrain.

Earlier that day, on the descent from the Andes Mountains into the Amazonas region, we had been joined by the Rio Marañon – our first sight of the Amazon river at the point in Peru where it is most wide. It flows from south to north, grinding a spectacular valley almost the length of the Peruvian Andes and draining all its water. Like a gutter, collecting the rain from a roof, channelling it north, to where we are on the road to Chachapoyas, and where the Marañon turns ninety degrees and drains down towards Brazil and becomes the Amazon River. It rains all year round in the Peruvian Amazonas region, and, as you descend into the much hotter, humid and thick air of the lowlands, peeling off layers of clothes as you go, dark clouds gather in the evenings to unleash their load before the eastern flanks of the mountains.  You are dropping into the Amazon basin and, at the right time of day, you’ll pass under brilliant rainbows – the point between wet and dry – a real feeling of passing from one climatic zone to another; sky arcs like a doorway to the rain forest beyond.