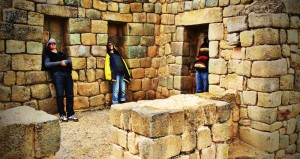 Driving south from Quito, there were still thousands of kilometers before dropping back down to sea level and the border with Peru. You are in a land high in the patchy clouds  – crispy air at night like a kind of express autumn as we raced south into the winter. And nestled in valleys on either side of the Pan-American there are too many things to see. A week later the landscape changes to an empty, rocky landscape, a wilderness, like a grand finale before landing in the middle of vast banana plantations. The weather becomes warmer – the sun draws a sweat as we set about collecting over half a tonne of diesel and taking it with us over the Peruvian border. And then you can drive for thousands of miles without really having to climb anything more than a hundred meters at a time. No more endless curves and tortuous contour hugging – just beautifully straight roads through stunning deserts. 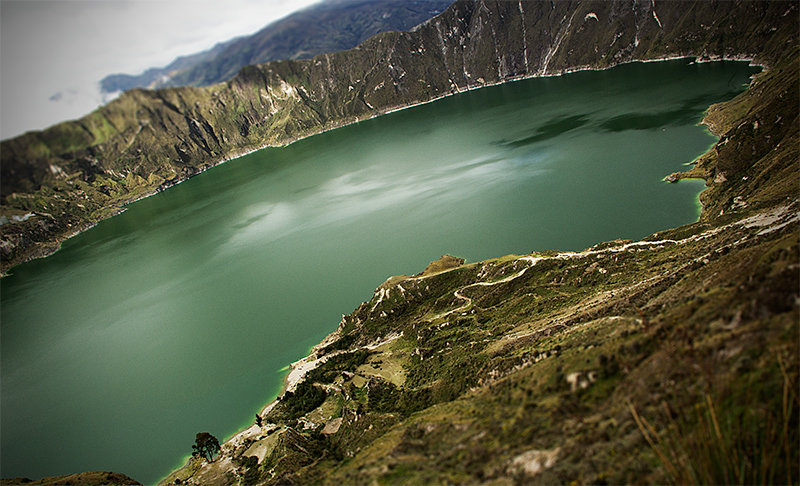 First stop on the road, then, was the Laguna de Quilotoa, a mysterious water filled volcano. The air is thin, this is the highest we’ve climbed – 4ooo m – so far on our journey around the world. Some time before the Incas took over the lands around here, the northernmost point of their empire – this volcano catastrophically erupted, sending destruction across the Andes to the Pacific and covering most of Ecuador in thick black ash. Eight hundred years later, the caldera that was formed has filled with water to form a beautiful lake hidden from the view of the Andean peaks around. The truck struggles to start in the morning – there’s not enough oxygen to burn the diesel. It splutters and there’s a cloud of grey smoke whenever I press on the gas pedal, that doesn’t go until we have coasted back down to Latacunga.

Measured from the center of earth, the highest mountain on earth is Chimborazzo. Being so close to the equator, where the earth bulges out as it spins, means that it is 2 km higher than Mt Everest. Cruising south from Latacunga, through dusty Ambato,  Chimborazzo rises up on the right hand side. Rain and then sun follows us on alpine roads complete with single carriage trains running beside along a narrow gauge rail. We cross dusty, flat zones – looking as hot and thirsty as Mexico for all the altitude that we are. All the while, low clouds, or the cut of the valley, hide the snowy peak that’s the closest place on earth to the sky.  Low clouds lower than high highlands – otherworldly, like the normal got turned upside down. 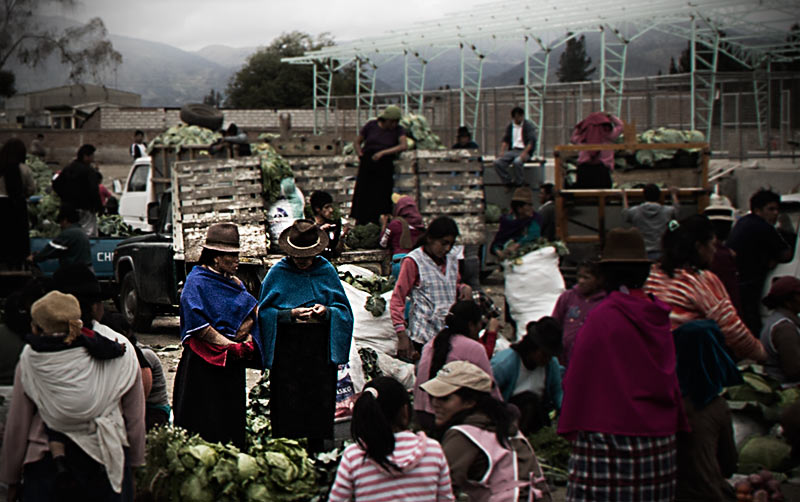 We reach Riobamba as darkness appears and stop at a gas station for the night. We have designated Riobamba as the a likely place to begin the first stage of our diesel smuggling operation: We intend to carry 20 odd tanks of Ecuadorean fuel into Peru – a move that will save us hundreds of dollars. A liter of diesel is 25 cent in Ecuador. In Peru it isn’t. We find a big whole sale market in our search for some kind of container but we have faffed around so much that all the plastic tank sellers seem to have gone home and left it to the vegetable people. Lots of pigs whole roasted by the side of the road. 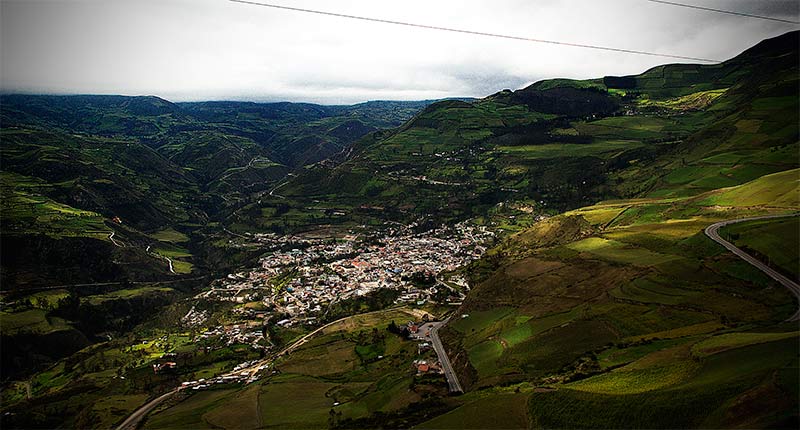 Continuing south and hitting the hills again, the road twists and turns past houses clinging to the mountain sides. The narrow valleys open out occasionally, though, and a small town, like Alausi, seem like vast cities. Between Riobamba and here is the Devil’s Nose which is best seen going up and down on the little railway that is still with us after all these miles. Apparently many people visiting Alausi are here to catch such a little train. But I’m still not sure what the Devil’s Nose actually is – a funny shaped mountainside or a more general term for some of the torturous climbs and descents. From the Pan-American, anyway, we spotted lots of candidates ut, you know, the place is not short of rocks. 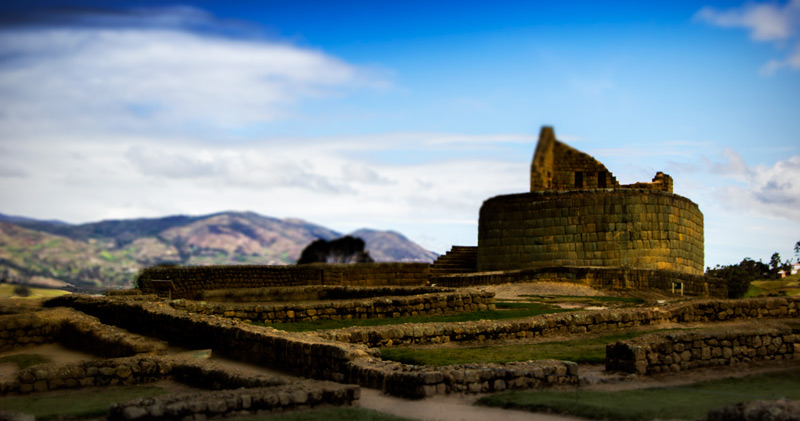 The most “important” historical site in Ecuador is Ingapirca – the largest known Incan ruins north of Peru – an astronomically aligned collection of foundations, walls and a temple of the sun. The Incas took control of the Cañari people who had already built most of the site. They now give their name to Canar which is the town on the Pan-American where you turn off for Ingapirca. You know, it was the first pre-Hispanic ruin we’d seen since glimpsing the remains of the Mayan Empire in Guatemala – Ingapirca is not that big, nor would it be that impressive if you’d arrived from Peru. But we enjoyed it. But do yourself a favor: Go on a weekday, or at least be there sharp at 9 am on the weekends, and you will see something of the Ingapirca magic. Go when the crowds arrive off the buses and the place gets all too easily swamped. Architecturally, we found the short road to the ruins very interesting: Here there are lots of fancy looking houses – two, three story buildings with curvy tinted windows and elaborate roof terraces – even the odd turret . They reminded us of the those houses that the Romany Gypsy of Romania have built with money sent in from their familial diaspora. In fact, we’re told. they are mostly empty, bare concrete rooms too many for the family remaining – they, too, are funded by their brothers and sisters working abroad. There’s free WIFI in Cañar if you stop opposite the little square towards the south end of town.

Cuenca is, of course, where we find the tanks we need. A bustling city and kind of pleasantly obvious why so many non-natives settle here. And although we didn’t realize it then, Cuenca is your largest and most useful city for a thousand kilometres if you follow the highway down to the coast. Well if you going south on any road too. We found the tanks, after days of sniffing around random scrapyards and motor oil merchants, in a well-stocked plastic tank shop. The plan was to fill up once we down at sea level so as not to trouble the truck with the extra weight across the last bunch of mountains. What we found out was that the “one tank only every time you visit” was completely enforced at the gas stations down to the border. We had to back-track half way to Guayaquil until all 22 of ours were full and stashed away discreetly. 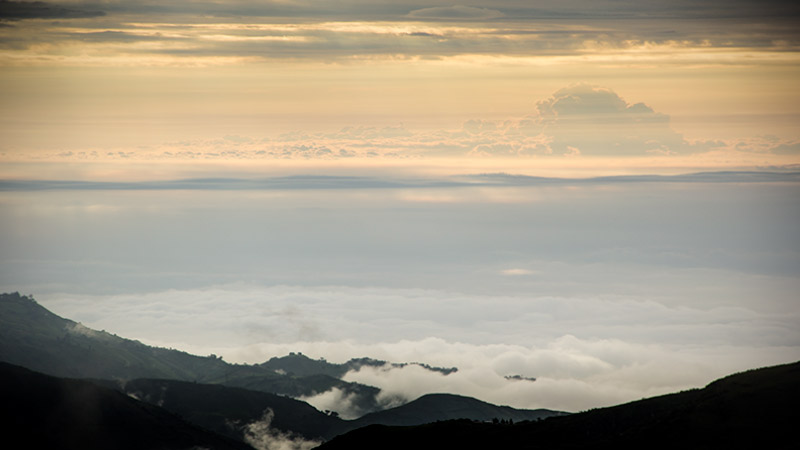 By this time, you are traveling through vast plantations of banana. Long straight roads through a world of banana; occasionally a house or two have managed to elbow their way in between two massive banana farms; occasionally a whole village has done that, although I suspect the dominant life-form around here – the bananas – only allow that to happen because the humans need somewhere to live. Mostly bananas. And banana trucks. So, it’s kind of tropical down here after the alpine Andes – the road between them was incredible, crossing a moon or Mars-like landscape before the banana plants began to increase in number with every meter dropped. 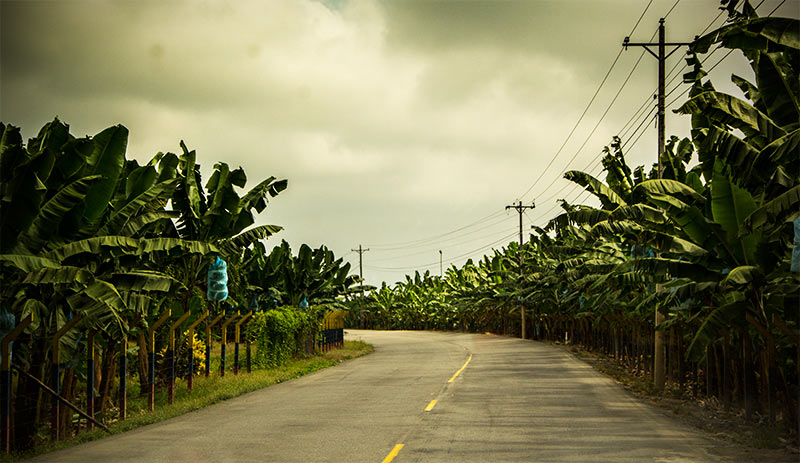 But as you cross that man-made line known as an international border, the green field-orchards soon disappear abruptly after the artificial irrigation finally gives way to the unexpected desert of coastal Peru – a desert that hardly stops until northern Chile, including some of the driest places on earth. A truck full of diesel. We’re starting to think we should have brought water with us. 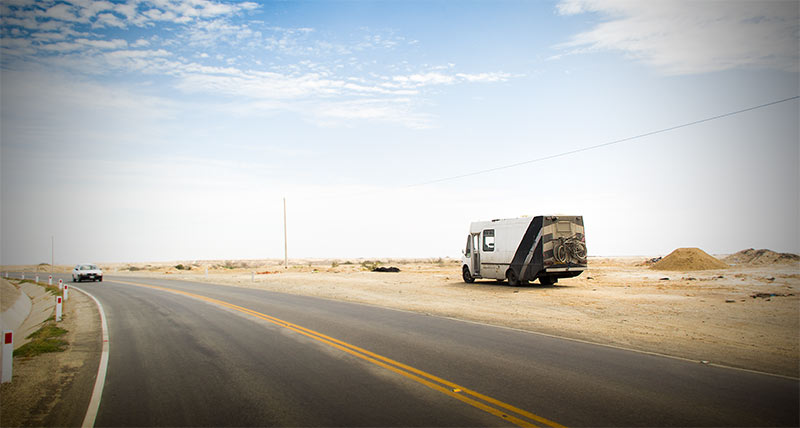