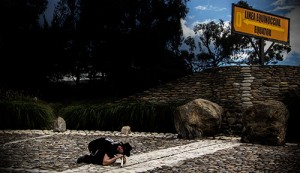 On board LOC Jigsaw*, we are very fond of lines, whether real or imaginary, and so you can imagine our excitement as we found ourselves crossing the equator. Fortunately we are not alone; we pulled off the highway just past a small town called Cayambe, at zero degrees latitude exactly, to find the wonderful monument and project known as Quitsato. There are no demonstrations of water swirling down plug holes, balancing eggs or other fanciful, fake displays here – instead there’s an excellent review of the significance of being precisely at the middle of the earth and why this part of Ecuador is the prime site on the entire planet to appreciate it – for us and for the civilizations that have lived here for thousands of years… 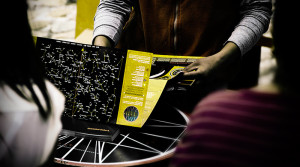 The discussion is led personally by a member of the Quitsato team – and their enthusiasm certainly matched ours: Our first ever steps into the Southern Hemisphere; equidistant between the poles; the entire night sky visible at once; on average the closest point to the sun and the furthest from our planet’s center – to look up from our earthcircuit and ponder the circuit the earth makes through space. The equator is a bit over 40,000 km long and, because the earth bulges in the middle as it spins on its axis, it is the longest, continuous line that can be described upon the surface of our globe. Forty thousand kilometers (25 000 miles) is also exactly how far we have traveled in our *Low-Orbiting Craft since leaving Europe 3 years ago. Imaginary or not, it is a line like this that blows our mind.
Quitsato, Quito, lots of towns and villages around here called Quit-this or Quit-that – in the old, local language of Tsafiqui, “Qui” means “middle” and “to” means “Earth”. Yes, peoples pre-Hispanic long understood that the planet was round and that this was the middle of it. Sun, Moon and Star worship is/was, of course, very common in Central and South America and, while the Mexicans had their pyramids further north and the Incas had their temples further south, the Andean region in Ecuador is the only place on the Earth’s equator which has enough volcanoes and towering peaks to form a kind of natural astronomical observatory. You only have to climb the nearby mountain of Catequilla to see that you are standing on the equator: on the northern horizon you can see the Pole Star; spin right round and in the southern sky hang all the constellations that were hidden to the Eurasian civilizations and their know-it-all astrologers: climb down from this lofty peak, northwards or south, commit yourself to one of the hemispheres, and you lose that complete cosmovision, that all-seeing space eye. Nowhere else on the equator, neither in the Brazilian Amazon, Africa, nor Indonesia, do you find a good enough vantage point above the rain forest and endless jungle to easily appreciate just where on earth you are.
Indeed, we were told how recent excavations upon that very summit of Catequilla suggest there was a circular site which has the equator running right through it – a summit visible by all the people living for miles around; how there are ancient ruins and, in Quito itself, a few churches (surely built upon pre-Hispanic temples) that are aligned with the movement of the sun and the moments of equinox and solstice; and how this whole region, nestling between two Andean mountain ranges running north to south, could have organized itself with respect to the information provided by this solar clock.

Wiped out and brain aching from all this talk of ancient astronomy and celestial mechanics, the Earthcircuit crew retired back to their craft for some gentle recuperation. It was daylight as we left the monument and, 12 minutes later, darkness had arrived by the time the water had boiled for coffee – twilight shortens as you approach the middle of the earth and here, where the sun sets exactly perpendicular to the horizon, night comes quickest of all latitudes. And thinking of latitudes and longitudes, I remembered reading somewhere that, upon the high seas, the old Dutch, English and American navies performed the ritual of King Neptune whenever their ships crossed the equator. It was a kind of morale-boosting event that involved the experienced sea-farers abusing the novices, dressing up in drag, performing mild torture and other forms of abuse and hazing. I wondered whether there should be an equivalent celebration for overlanders – probably something involving a daft photograph of people jumping in the air. Still reeling from the effects of the longest line on earth, sipping some strong Colombian, maybe even we could swap clothes and slap each other around a bit.