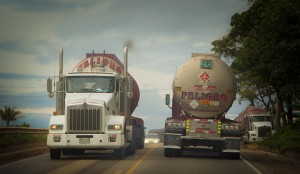 Our great South American road trip has begun in earnest. From Santa Marta, Colombia to Lima, Peru – 3,500 km in three weeks. Doesn’t sound too far if you imagine driving, say, from London to Ankara or across the USA but this is South America we are talking about – where the traffic plays footloose, fast and free with such concepts such as ‘risk’, ‘safety’ and ‘overtaking on corners’.

The first five hundred klicks, then, are dominated with 30 ton fuel tankers marked ‘Peligro’ front and back. This is Spanish for ‘danger’ – and never a truer word have I read on the back of a vehicle, to be frank; these monsters rushing fuel from the coast to the capital drive as if their load has a limited shelf-life or, maybe, like the drivers themselves are approaching their Best-Before… Fresh in my mind, you see, was the horrific story of a fuel tanker crashing near Mexico City – the trailer separating from the tractor and exploding as it veered into the opposite lane and the houses lining the highway.

The thing is that our truck is not that fast or powerful and thus when we hit the magic 95 kmph we want to stay there as long as possible. There’s plenty of stuff to slow you down; roadworks, busy hamlets, police checkpoints, speed bumps, wandering livestock and slower vehicles. And from that list the only item that you can do something about legally (and without wrecking the suspension or having to wipe cow off  the hood) is the slow vehicle in front, passing them as quickly as possible, trying to conserve that momentum and joining in the fun with all the other maniac drivers out there who are trying to do the same.

Anyone who has gone to battle on the highways in India will remember the encouraging messages posted by the government by the side of the road: Stuff like, “Overtakers make business for Undertakers!” – I’d be wondering if that little play on words could be translated into Spanish except for the fact that every ounce of concentration is focused on the traffic.

You see, regular readers will recall, of course, that I, the driver, sit on the right hand side of Jigsaw, our English truck. And this means that there are certain difficulties in seeing the road ahead when trying to pass a slower vehicle. I have often fantasized about installing a couple of mirrors, one of which is angled forwards like a kind of periscope, to help me in this respect – but, until I do, our safe passage depends on the accuracy of the information supplied by my co-pilot who is in the hot seat, in the middle of the road, with the necessary clear view ahead if I pull out just a bit.

So, cruising fast a day south of the Colombian Caribbean coast, coming down off a mild slope, we hit the magic 95. There’s a slow mover in the distance in front of us, billowing black smoke, its off-side rear wheels wobbling strangely.

<< OK, go out a bit, Dunia shouts over the din of our engine, OK back in – there’s a truck and a silver car – after the car pull out again, she says.

We’re rapidly approaching the slow vehicle in front and I relax our 95 down to 90 so that we don’t have to seriously reduce our speed while waiting for the moment to overtake. The truck whizzes by the other way, then the silver car, and I pull out a little again to give Dunia another look.

I slow us down further going into the corner, frowning; we’ll be right behind this thing soon, matching it’s slow speed which makes it all the more harder to accelerate past it when there’s a chance.

<< OK, go out. Half a moment of silence – we’re nearly right behind our obstacle, half a moment before I have to hit the brakes.

<< Yes! Dunia shouts, the rest of her sentence drowned out by the engine roaring one gear down.

<< Yes, I can go? I scream back – Dunia’s flapping her hand frantically…

And I pull out, stamping on the gas and getting ready to slip into top gear and take this sucker. Shit! No! There’s a fuel tanker coming straight for us, out of nowhere and going too fast for us to complete the manoeuvre safely.

<<Peligro! We both scream and I swerve back in, switching my foot from the gas to the brakes. We slow right down to 50, so close to this guy in front that we can make out his “How am I driving?” sign beneath the dirt on the back of his oil-burning jalopy. The Peligro fuel tanker screams by, sounding its air horn in a fit of rage, through the space we’d nearly been in a millisecond before. And, then, another bloody fuel tanker that has crept up behind, overtakes, sounding its horn, warning us that he’s passing me and the rust bucket in front all at once, conserving his momentum, swinging out in perfect time and thundering off ahead at the magic 95. As I mentioned; these things dominate the highways round here.

<<Christ, I say, sorry, I thought you meant, yes, I can go; not, yes, there’s something there.

Dunia was silent. Fused to the hot seat, in the middle of the road – a witness to the close shave and near death.

And after two days of that, twelve hours each, we sat in the shade of the gas station where we’d parked up for the night, a cool beer washing down the dust, the alcohol washing down the buzz. You’ll never read much on here about rock climbing, parachute-gliding, zip-wire flying or any of that stuff. But by the time we reached the quieter hills climbing up to Medellin I understood this about myself: I am an adrenaline junkie.