Meeting the Mennonites of Bolivia 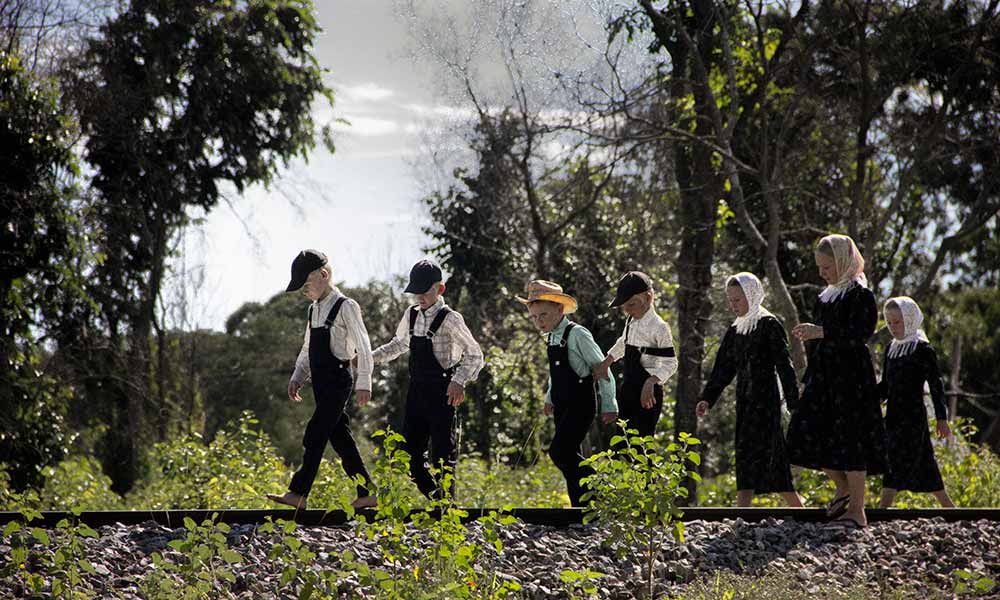 Back down from the Altiplano and well past Santa Cruz, we turned our orbital craft onto the road that heads hundreds of kilometers east across the empty lands towards the Brazilian border. It was proper tropical now, and through the heat and humidity, sure that our usual scant research had implied that there was not much happening round here, we settled back for the long cruise out of Bolivia. But then we came across something unexpected, something that really made me wonder about the earth, the people on it and how they choose to organize themselves. Unexpected too, that I had to dig out some German phrases. Low German phrases.

There’s a cartoon I’ve had in my head for many years – I would post a link to it but I can’t find one, it being a pre-internet sort of cartoon. I’ll try and describe it: The first panel has this guy driving a lonely road through the American Mid-West. There’s a hitch-hiker, dressed in a suit with a briefcase but he pays him little heed and drives on. On the second panel, he’s still driving and sees another hitch-hiker who looks exactly the same with the same briefcase – he passes him but does a double-take. The third panel, again, has him driving the same road and there are three hitch-hikers; two together and one further up – all looking identical with the driver now completely google-eyed. On the fourth and last panel, there, by the side of the road is a big factory with a sign “Clones Inc.” and dozens of the hitch-hikers spread along the side of the road.

It was kinda like that, these guys dressed up exactly the same with black dungarees, blue shirts and beige cowboy hats.  One after the other, sometimes in pairs, standing where a dirt track met the main road. By the time we got to our fourth panel, there was a whole bunch of them mingling around a couple of shacks at a junction; a few of them even had tractors pulling wagons full of their women all dressed in identical plain dresses and sun hats but most of them were hitch-hiking or, at least, waiting for the bus. These were the Mennonites and we stopped to give one of them a ride. 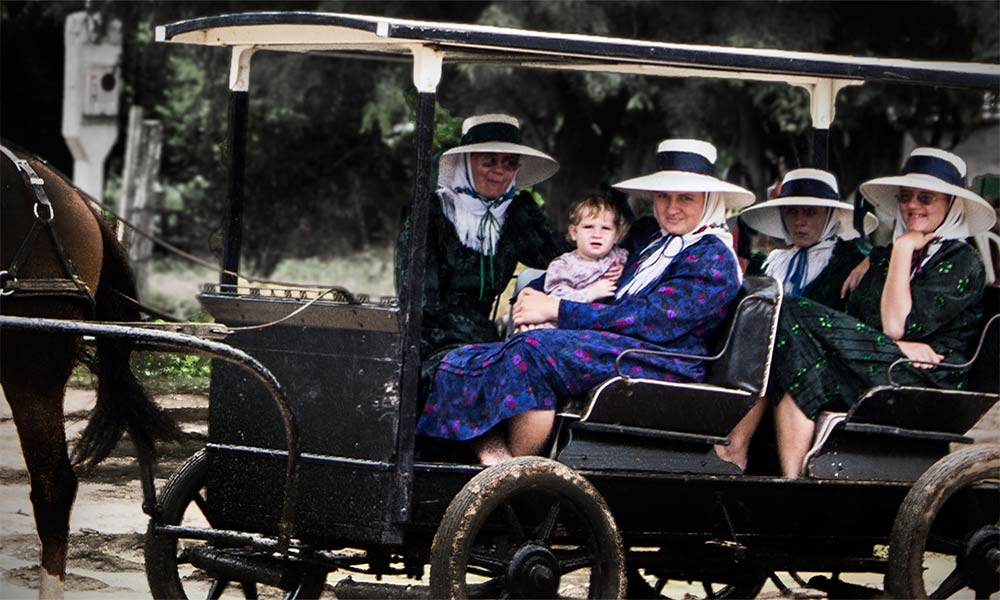 The Mennonites are a large global community of 1.7 million people in over 80 countries. They have in common their religion which began hundreds of years ago in Europe, following the teachings of Menno Simons: adult baptism, a belief in the simple life and pacifism. This move away from Catholicism was a part of the Protestant Reformation – a supposed move towards a more rational view of the relationship between humans and their God – but it was also a move away from mainstream society. Suffering various forms of persecution, a great many Mennonites were allowed to settle, first in Russia, and then, when the authorities turned against them there during the last decades of the nineteenth century, in Canada where they were valued as self-reliant pioneers.

Our hitch-hiker, Cornelius Neulander, told us about his own grandfather who had lived in Canada but left for a new life in Mexico where his father was born. His father had emigrated, with hundreds of other Mennonites, to Belize to farm the land and raise families. From there, Cornelius had brought his own family to Bolivia to start afresh some ten years before. We asked him how many of them were here and he replied in Spanish, “My colony, Colonia Belize has three thousand” and, in fact there are 60,000 Bolivian Mennonites in dozens and dozens of settlements and we were intrigued by their story, a movement across the planet that meant each generation had a different passport but suspecting that the specific nationality meant very little to them.

You have probably heard of the Amish who are an off-shoot of the Mennonites, originally from Swiss German regions of Europe. But, unlike their North American relatives, the Bolivian group, although they are described as “Old Colonialists” who have preserved their original beliefs in the face of the world’s modernization, are unexpectedly comfortable with some aspects of modern life. Their homes have generators and solar panels; they use tractors, machinery, and artificial fertilizers and pesticides on their farms. Cornelius even had a mobile phone and a camera and he was going the same way we were – to Aguas Calientes, a thermal spring that heated a whole lake and was a popular recreational area for the locals, native Bolivians and Mennonites alike. 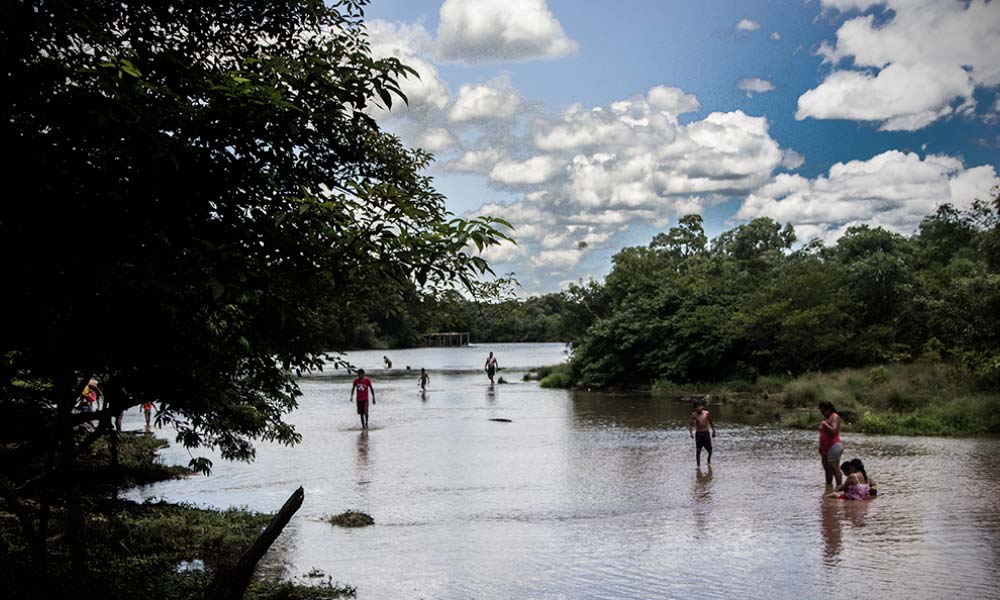 A couple of hundred kilometers down the road, then, we found a spot under some trees to park up in the attractive camping area at one end of the small lake. The waters bubble up from the ground and, although it covers a large area, are never deep. The temperature is around 30°C, kept warm, I imagine, as much by the tropical sun as by geothermal activity. In the shallows there were many families relaxing and the Mennonites were easy to spot; the women sitting together in groups with their full-length wet dresses clinging, scarfs around their heads, and the boys displaying their white skin and blond hair. Further up, there must have been 25 tents huddled together in the shade which was the Mennonite camp, communal cooking gear at one end with hammocks and washing lines stretched out between the trees. Here the older guys still wore their immaculately pressed black dungarees, blue shirts and beige hats to be copied exactly by the kids once they’d got out of the water. It was kind of surreal to see all this, here in the middle of the Bolivian lowlands, a tribe of clone-like European immigrants calling out to each other in Low German, laughing, playing, chilling out, drinking beer, smoking cigarettes, seemingly not so far from the local norms and the people who they talked with too and made their acquaintances.  But in reality so, so different.

We sat down with two brothers and a cousin from Colonia Berlin, brought some beers out and asked them to tell us more about their lives.  They were shy at first and we talked in Spanish which the older two could understand but the youngest, who was fifteen, had problems following. Apparently they are not taught any Spanish and the men only pick it up in order to conduct business with the local people. The women can only speak their particular dialect of Low German – the reason offered plainly was that they’d be less likely to leave the community if they didn’t understand the language of the country in which they were born.

It was an interesting conversation and we learned that they didn’t have television, had never used the internet and didn’t play any music beyond singing in the church. They all worked every day on the farms and pretty much never went further than the nearest small town to get diesel or supplies. The oldest, of 25 years, had only ever been once to a city – Cochabamba. None of them could say much about the history of their people – the older two had moved here from Belize when they were very young and couldn’t remember anything about it. We prompted them from what we had learned from Cornelius; their history back to Mexico, Canada and Russia but their faces were as blank as when we’d told them about our own origins in Portugal and England. 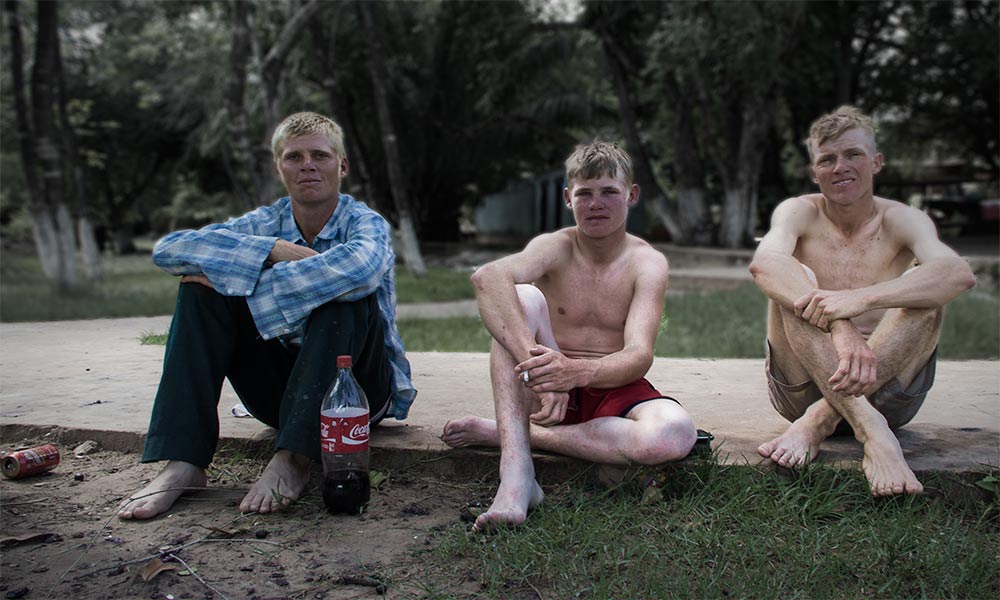 Reaching internet land again, a few days later, I googled up what I could about the Bolivian Mennonites and it seems that, although their independent communities may be an attractive way of life, there is a cost to this social cohesion that has kept them all together for so long. I read about the Ghost Rapes where a number of Mennonite men anesthetized whole families by night and sexually abused them. It is a disturbing story which seems most incredible because the lack of communication, education and information within their society contributed to these events happening over several years to a still unknown amount of victims before ten perpetrators were caught and sent to prison.  And there is even some suspicion that it’s all still going on. In Bolivia, in some small communities, the authorities only have jurisdiction over the worse of actions like murder – a system that is designed to protect the integrity of traditional, indigenous cultures. That’s why the Old Colonialists are here. They left Canada because they were being forced to send their children to normal schools and they moved on from Belize because their growing community was too big to be kept separated from mainstream society.

But before I had read about all that, back at Agua Calientes, the next day, the Earthcircuit Crew drank their coffees and tatted down for the final last drive to the border. It was still bothering me that here were these people, living off-grid, thousands of miles from their origins, moving across the world, it seemed, as slowly as it took time to raise a family and forget about the generations before that had started this exodus. We sought out the oldest looking guy and explained that we wanted to know something more of why there were here. His name was Peter and even here couldn’t (or didn’t want to) tell us much about life back in Canada where he was born or the their history before. He told us “Here, in Bolivia,” he said, “we can be what we want to be”.

The Mennonites we met were all very polite and friendly. They did seem kind of wary of us but they did invite us to their settlements and it’s a shame that we didn’t take up their offer. Because knowing what I now know, I’m not sure it would have been the best of ideas…