So Where Did The Chelyabinsk Meteor Come From? 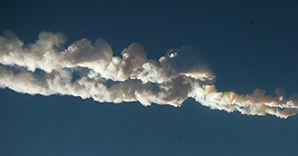 Out of the fucking blue, is the obvious answer to that question. It was completely unexpected and was too small to have been picked up by Spacewatch. Astronomers around the world, however, have been trying to work out the origins of the Chelyabinsk superbolide – and one team from Madrid think they have found the parent asteroid, working on an assumption that the meteorite was a piece from a cosmological-speaking recent break-up. The worry is that there’s more on the way.

Many of what we know as asteroids are in fact collections of rocks all with the same orbit. Think of them as rubble piles. Over time these pieces will separate – for many reasons; collisions internally or with other asteroids will spread the pile out and the gravitational effects of passing planets will further perturb the individual orbits. The rubble pile now becomes an asteroid family. The meteor storms that send shooting stars over the earth are examples of an asteroid family – and often they will have a bigger, parent object lurking around. Alternatively the members of a family spread out along the parent’s orbit, often characterized as a ‘string of pearls’.

So as soon as the Chelyabinsk event happened, with the echoes of the explosion still reverberating around the atmosphere and thousands of dashcam video clips still being uploaded to YouTube (or its Russian equivalent, I imagine), astronomers had already begun to work out the likely orbit for the asteroid that hit us. It arrived on the sunny side of Earth, from the Pegasus constellation – even if was far north during the winter which, together with analysis from observations of the event, gave a range of possible orbits from the different teams involved.

A few months later, C. de la Fuente Marcos and R. de la Fuente Marcos released a paper that compares an average of these orbits with known orbits of asteroids that have been detected. From this selection of asteroids, the team further applied an N-body simulation to come up with the likeliest candidate – introducing  2011 EO40 – an Apollo-class Earth-Crosser and Potentially Hazardous Object; a  lump of something that is as big as 300 meters across and only known from 34 days worth of observations. Can we trust this assessment? The man, himself, says “more observations are needed but it may take years until they are completed because the objects are rather small and they only undergo favorable encounters with our planet (in terms of geometry to be able to observe them) every several years.” Which neatly explains why we didn’t even see that one coming.