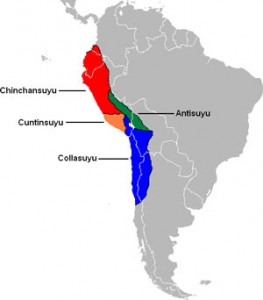 Tawantinsuyu is the name the Incas gave to their empire. It means in Quechua, “Four Regions Together” or “Four Directions-under-the-sun United” – and reflects the expansion of the Incas from their homeland in the Cusco region of south-central Peru. By the time the Spanish arrived and took over the show, the Inca Empire had stretched north to Columbia; west to the Peruvian coastlands; south far into Chile and east into the Aymara lands of Bolivia. Of course, the modern nation of Tawantinsuyu doesn’t exist in any official sense and you will hardly find it mentioned anywhere beyond history books and the propaganda of some of the more ambitious American Indigenous groups. However there are some important elements to traveling through this part of the world that we couldn’t fail to see and thus begin to believe that these lands are in fact a nation unknown.

Tawantinsuyu shares a geography: The Andean mountain range which rises up in Colombia and runs for the thousands of miles south. On its eastern flanks are the Amazonian highlands – to the west, there’s the driest desert in the world stretching down the coast. This area shares a people: It was always the most populated part of South America and gave rise to many civilizations and cultures – it still has a large indigenous population whose style and look draws deep distinction with anywhere else on the planet. It shares a history:  From times before the Incas through domination by the Spanish and the struggle to survive in the modern world. And, also, they share the rainbow flag.

But while the notion of Tawantinsuyu hardly exists, it is the legacy of and identification with the Incan Empire that is more visible in the minds and lives of the Andean peoples.  In search of a cultural tradition to either stand proud against modern-day exploitation, to repair the dignities lost in a colonial past or to forge new nationalisms, the concept of Inca is used wherever their empire stretched. So, in Ecuador, for example, the indigenous Saraguros people have increasingly built a self-identity with the Incas, naming schools and offices after Inca emperor –heroes and taking Quechua names as they take their place in the pan-Ecuadorian indigenous organizations that have formed to protect indigenous rights. On a grander scale, in Peru, the Inca legacy as a great empire centered on Cusco has been adopted on a country-wide level and used to build a national identity that is not simply to draw in the tourists. Equally in Bolivia, where the Aymara language and culture predates Inca control and the use of Quechua, the modern process of indigenous political emancipation and equality has employed symbols that have as much to do with conquering Incas as they have with any of the more ancient traditions.

No one is quite sure when the more organized cultures arose in this part of the world. Ruins have been found that date back to times before the Giza Pyramid of Egypt, some 5000 years ago – and the years since have been sketched in with the rise and fall of such civilizations as the Chavin, Paracas, Nazca, Huari and Tiwanaku. Many of these cultures held similar religious beliefs and managed the dry desert, mountain valleys or altiplano using the same technologies. It is obvious, of course, that there is a continuous evolution from the earliest to the later, culminating in the Inca. In fact, the Inca had only moved beyond their homelands to control this vast area in the century before smallpox arrived to ravage their population – followed within a few years by the Spanish. In the north of their empire, some of the regions would have had only a generation or two of Inca domination before they were forced to submit to the Spanish crown instead. Even at the center of the empire, Machu Pichu (that amazing feat of construction and engineering) was only completed a few months before the age of the Incas drew to a close. And yet, though there may have been only a mere flash of Inca right at the end of a long and industrious Andean culture, it is the Inca identity which is assumed by the descendants of their subjects.

Let’s perform a thought experiment: Imagine that Germany had won the First World War and had assumed control over Europe. A couple of generations later, then, imagine that the US had suddenly invaded and completely and utterly took control for the next few hundred years. In the distant future, an indigenous European people emerging from American dominance are searching for an identity by which they can promote their rights, preserve their dignity and take their place at the political decision-making table.  But instead of re-adopting the notions of French, British, Spanish or Italian, the Europeans are thinking themselves as the inheritors of a German culture – even if in reality they had only been forced to be German for a short while before being forced to be American.

The formation of an Andean identity

So why is this kind of what we see in South America? The first two answers to this are, of course, what happened during those years of Spanish control and what happened before, as the Incas built their empire. The Spanish Conquistadores were quick to destroy as much as they could of the symbols of indigenous identity that they found. Temples and buildings were torn down and recycled as churches, records were burnt and traditional practices were forbidden. The people were forced to dress differently and their whole society was rearranged to benefit the new rulers. And within these ashes the truths and facts of life before the Incas were seldom preserved.

But this process of forgetting was kicked off by the Incas themselves. As they expanded across the region, they practiced their own version of the classic “divide and rule” which they called mitmaqkuna. They transplanted conquered communities far from their ancestral lands so that their “federated” empire was a hotch-potch of different ethnicities. Going back to the example of the Saraguros in Ecuador:  Many of these people are descendants of a group that was forcibly moved there from Lake Titicaca, thousands of miles south in Peru, by the very same Inca conquerors they are presently working to identify with. This relocation of communities was performed all over the Incan empire and, once it fell to the Spanish, many people attempted to return to their proper ancestral homelands. The reality was a mixing, blending and unification of a large proportion of indigenous population… A second Incan effect was the spread of their own form of Quechua which quickly became a lingua franca throughout the empire. The Spanish were quick to use this single language to communicate with the varied peoples. And because of this it became easier for them to characterize the indigenous as a single cultural entity – a unification of identity that is still so evident today.

Which brings us to the modern nation of Tawantinsuyu.  The flag that I has been chosen to represent Tawantinsuyu is the rainbow flag known as the Wiphala. You set it fluttering proudly outside houses as soon as you climb into the Andes crossing south from Colombia. By the time you get to Cuzco it is deployed in the central plaza as the official symbol for that city, the former capital of Tawantinsuyu – and, in Bolivia, it’s alternate, squared version, has been adopted as the national flag, paired up with their traditional tri-color on police uniforms, government buildings and military aircraft. The Wiphala’s origins are pretty vague. It is known that the Inca employed a three-color rainbow combined with serpents as the crest for the Inca Emperor himself and remains of vases from the ancient Tiwanaku capital in present-day Bolivia also depict the squared pattern. But the very idea of a flag, fluttering high in the breeze and emblematic of a nation is a European invention and, so, we must examine what is meant by the indigenous communities, the length and breadth of the Andes adopting this re-vitalized motif.

In the north, the Confederación de Nacionalidades Indígenas del Ecuador have long been fighting the commercial exploitation of their lands. In Peru, where they have brought in an “Indigenous Peoples Consultation Law”, to include the indigenous in decisions about mining or oil extraction,  they are now arguing who is truly indigenous and who is ‘merely’ a highland peasant. In Bolivia, Evo Moralas, the first indigenous ruler of a South American country, continues the “socialist” revolution and tries to make it acceptable to all the peoples of that divided country. The modern nations might be separate but the concerns are the same – that the original peoples have long been treated badly by outsiders and that they face a hard struggle to reconcile their situation with the rapidly developing world they exist in – even as they are afforded more and more rights. An identity, a background or a conscious history is an essential tool in this fight and they find that, by adopting an Incan identity and the rainbow flag, their heritage is actually a shared one that exists all over this region that was once called Tawantinsuyu.