Carbon Credits in the Garbage 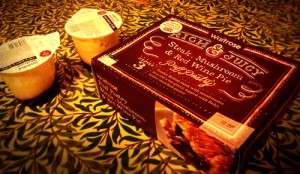 When I think about offsetting the carbon footprint for flying from the UK back to Costa Rica, the image of footprints all the way across 8000 km of Atlantic Ocean comes to mind. That’s a lot of footprints. I’m glad I’m not walking.

According to an online calculator, I am going to produce 1470 kg of CO2 which is nearly 15% of my total annual carbon footprint – if I was an average UK citizen. That’s a whole load of hot air, to be honest, just for 14 hours of travel – probably a Tican family of six would burn that much in a year of sitting in the traffic around San Jose; further north in Nicaragua, my single long haul flight is the equivalent to an average family’s entire annual carbon footprint. In the UK, meanwhile,  it’s the equivalent of how much an average citizen generates in a year just for feeding themselves. And get this: it’s more or less identical to how much an average UK citizen releases on heating in a year. See the connection? Instead of fighting the British weather all year – get a flight to the tropics! It’s the same!

Anyway, that online calculator invited me to offset my flight by paying $18. Apparently some of that money will get to projects around the world such as reforesting or getting people to use more efficient pots. Projects in places like Costa Rica and Nicaragua, I presume, thinking ahead to next week when we finally arrive back to our mobile home hidden away in the jungle. I was just coming up out of the tube station, the wind howling down the High Road and cold, dark slush underfoot. The brightest thing around was the supermarket, offering respite in so many ways – through its glass walls I could see the place was full of customers, their pit stop on the commute home. Hungry myself, I nipped round the back to the bins (where there are less queues) and pulled out my dinner for the night: Two strawberry trifles and a massive angus beef and red wine pie.

And then I had my epiphany. Why not have more of these carbon footprint offsetting projects in the places where they are producing all the stuff in the first place? Wouldn’t that make more sense? Wouldn’t it even be better to have a project which reduces the CO2 being produced in the first place rather than planting trees for the future? You can think of it this way: If all the collective UK carbon footprint was offset, how’d that work with these projects they’re offering? You can imagine the whole of Costa Rica being densely reforested – even the wonderful runway at their International Airport by the time they’d finished. Or maybe the Nicaraguan houseperson crying, “No más!” as the guys from the Climate Care nonprofit NGO org corp turn up with another few pots to add to the collection piled up in the kitchen. It just couldn’t happen of course – this carbon offsetting thing might encourage worthwhile projects and real changes in behavior but, as a collective illusion, it has no future as it stands now.

I had, in my hand, 1 kg of food that I had rescued from the supermarket’s garbage. According to the biogas people 1 kg of  ‘municipal solid waste’ will produce 100 g of methane when 50% of that waste is made up of food. So my dinner represents 200 g of methane that would have been produced if the supermarket had had its way and sent that beef pie and trifle to the landfill. Methane is over 20 times more of a problem, more of a greenhouse gas, than CO2 – this is the thing: Eating the pie and trifle produces CO2. Letting it rot in landfill produces methane. So, now, that 200 g of methane is worth 4 kg of CO2… You can imagine, then, the mess being made with all this food getting dumped – especially the thousands of tonnes that get thrown out the back of those behemoths of consumerism while the consumers inside stand frozen into non-action under the bright lights.

So with that one act of casual dumpster diving I generated minus 4 kg of CO2 which I’ll put towards the flight next week. That can count for one or two footprints from the watery trail to Costa Rica. Of course, this transaction is a completely imaginary one in my head – because there’s no system out there for me to actually trade in my self-made carbon credit. This is the epiphany. This is the problem. There should be a system of carbon credit trading for individuals and their individual actions. That, surely, is only fair – it’s like saying you can’t use money unless you become a company and register with the financial authorities. I think it’ll come, for sure, if this global warming thing really gets out of hand. Everyone will be making money by recycling, reusing and adopting low-carbon behavior. Not only will you save $5 by cycling to work, you’ll make an extra $1 to offset your weekend trip out of town. People living communally will have a distinct advantage of course. Oh shit, they banned squatting.

Well, let me take the photos of me eating the Angus Beef Pie with Trifle (on the dangerous side of the sell-by date) to the offices of one of those trading company wotsits downtown in the big, shiny buildings. Better still, I’ll take the packaging and plonk it on the counter: I wanna trade in the 200 g of methane I saved from the landfill.

[P.S. You just used released a tenth of a gram by reading this page]