The Only Way to Make Apple Crumble 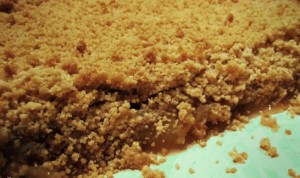 It has always been a belief of mine that there is never a single, correct way to cook anything, even apple crumble. There is always some small village somewhere that has been brewing up its own version of Bolognaise sauce or goulash for centuries. And if you cooked a lasagna with a banana in it, I guarantee there’s a sleepy harbor on a tropical island somewhere that has been doing the exact same thing since a bunch of Venetians got shipwrecked there in the 1700’s. And even if you cooked a banana-lasagna and used rice flour instead of wheat, probably you’d find a few of the families in that seaside village do it that way as well. Try telling them that a lasagna shouldn’t have rice and banana in it; they’d laugh at you.

So  I ain’t gonna put here a recipe of apple crumble because I think it’s the best in the world. More, I dunno, like I just feel I should get this out there because time and time again I meet people trying to make one like they would an apple pie – you know, made up all raw and then stuck in the oven. This pretty much always results in failure. And even on the old www, nine out of ten recipes will tell you to do it this way. It’s the wrong way – my recipe is the correct way and, indeed, for the first and probably only time ever, I don’t care which village you’re from.

Apple Crumble (serves from 1 to, ooh, 1000 depending on how small the portions are)

Basically, you’ll never find a recipe that tells you to stew the fruit rather than baking it. But stewing with a little cinnamon does incredible things to the flavor of apple especially. With water in there the resultant juices help steam the crumble to perfection whatever type of oven you’re using.

Ultimately then this recipe is also much better value for you, the people who eat it and the environment that has produced it. For a start it’s vegan and you can use a wide variety of fruit and even some vegetables without bringing chaos to the flavor. And because oven time is at a minimum you save on energy. And because you save money you can make a bigger crumble and feed more people…