The Cloud People of Kuelap 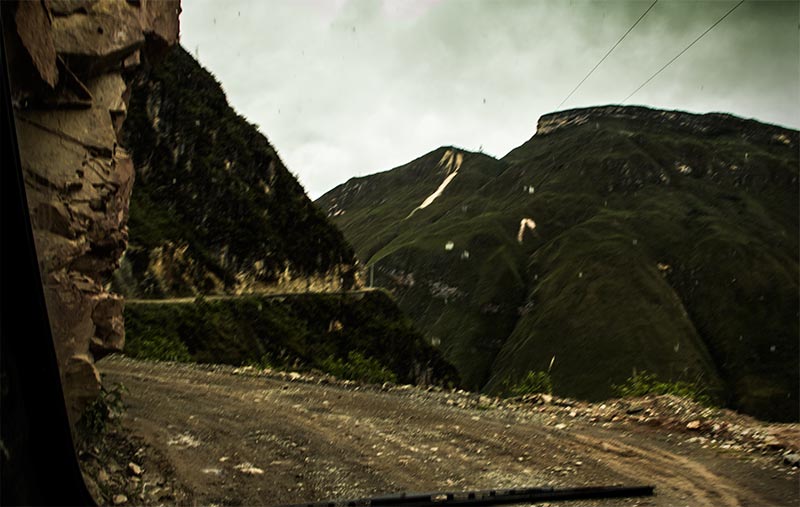 Who were the Cloud People who built Kuelap? No one really knows. Where are the cloud people who run this gaff now? No one knows that either. After three hours climbing the contours from the main road 2000 meters below, through mud and rain and hanging off crumbling tracks, we had arrived at Kuelap. Into a thick, damp cloud and there was hardly anyone around – a few shadows in the fog. None of whom admitted to being in control or knowing the deal on parking for the night. Mysterious. We could certainly feel the energy of this place, this Kuelap, this ancient stone fortress-type citadel on top of a remote mountain in Northern Peru. A questioning energy – one big massive question mark, in fact.

Although it is the largest monument of its kind in South America, predating the Incas’  Machu Pichu by 500 years and “rediscovered” a hundred years before Machu Pichu was – Kuelap remains an enigma: Not so unusual because no one knows what they built it for (surely a characteristic of most ancient monuments around the world), but definitely strange that such an impressive site is so off the main tourist circuit that we are the only ones here –  and will remain so until late the next morning when the first of the daily visitors put in an appearance. 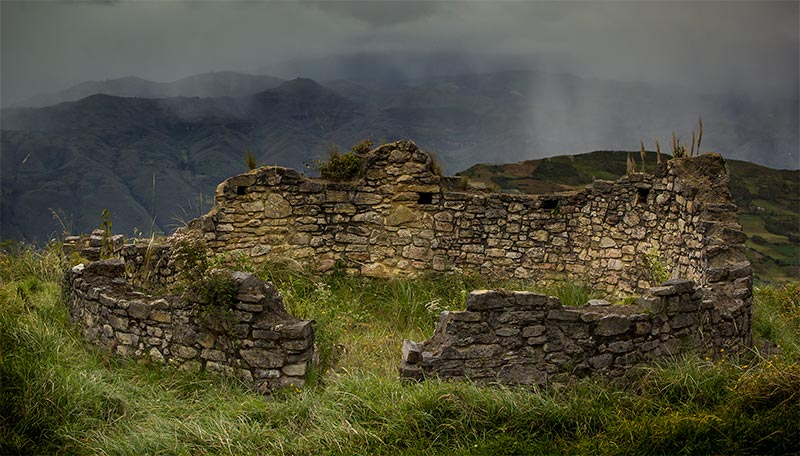 The town and the surrounding region of Chachapoyas is named after the culture that lived here before the Inca Empire took over. This was just a  hundred years before the Spanish arrived. So, like in a game of Chinese whispers, the Chachpoyans original name for themselves has been lost. Or so we are told repeatedly. Maybe they spoke the same language – no one knows that either. In Quechua or Aymara language, Chachapoya means the cloud or forest people – probably a reflection of their cloud forest home or their proximity to the Amazon rain forest – possibly because they were a whiter-skinned people. And the fact that they are assumed to have built Kuelap has two problems:  Firstly, this is the only such fortress/citadel in Chachapoyas and the preferred method of civilization in these parts seems to have been small kinship groups living in small villages of round, stone houses. It is said that the Kuelap was their defense against the Huari people who lived further lower down the mountain range and by the coast. The second problem stems from the fact that neither the Incas nor Spanish mentioned Kuelap at all – neither in the chronicles of the Inca conquering army of the 15th Century, nor in the writings of Spanish explorers.

Which , for me, represents something of a third problem: Isn’t this a bit strange? These people who don’t live in cities have, nevertheless, built the most massive and impregnable one the whole continent ‘ with more stone in it than an Eqyptian pyramid. And they did this to defend against invading tribes but then failed to use it, hundreds of years later, to repell the Inca invasion – who the Chachapoyans resisted for generations – to such a degree that the Incas didn’t even know about it…  Doesn’t make sense I’m afraid. 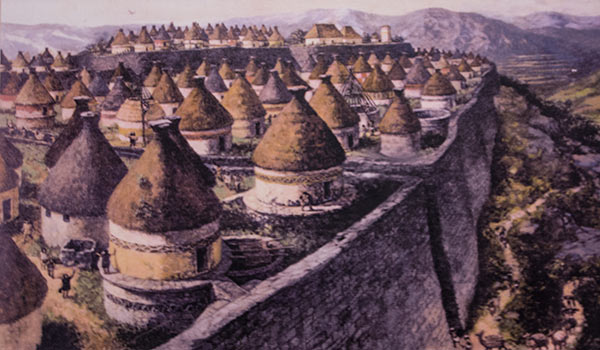 The Chachapoyans seem to have died out as a political entity by the eighteenth century although genetic and memetic lines permeate present-day Peru as the Inca forced their dispersal around the empire. They must have had one of the most enduring civilizations of anywhere in the Americas, however. Keulap was built from 600 – 800 AD (no one is sure) while the Inca conquest happened 700 – 900 years later. Their home region was isolated between a wide river and the Amazon jungle, a mountainous terrain that was a kind of micro-climate crossroads between the rain forest and the cloud forest.

Infamously, a couple of remarks by their conquerors have led to a theory that these white-skinned people were the ancestors of Celts or Phoenicians sailing from Europe thousands of years before Columbus. Both the Inca rulers and Catholic priests commented on the tall, fair, white, beautiful physique of the Chachapoyans. But this is a fanciful idea born of some misinterpretations; namely that “white-skinned” just means “more white-skinned than anyone else we’ve met recently”. Possibly even, they could have been more “white-skinned” than the Spanish since Spain was much more multiracial than most places. The idea of European descent has also been kinda refuted by science – a comparison of DNA here and a dental/skeletal survey there. But since there are no Chachapoyans around to really prove it one way or the other…  And, to further muddy the position you’re trying to get straight in your head about all of this, you see pictures of Andean families with a white, blond, blue-eyed kid – there’s even one at the local history museum in Leymebamba. Who are they? Albinos?

This story fascinates me. Not simply because of the nerd-pro ancient conspiracy angle but, moreover, because it shows that the experts truly have little idea what was going on in Chachopoyas, what Kuelap was all about, who built it and what bloody color they even were?