A few days after leaving Nicaragua, I read a report from some overlanders with a right-hand drive vehicle across the Nicaraguan northern border. They said that they had been refused entry because their steering wheel was on the wrong side. Apparently, Transit Law 431, Art 165 says no RHD vehicle is allowed on Nicaraguan roads even though we had just driven through the country with no problems. So the first thing to note is how random certain authorities can be in enforcing their own laws. The second thing is, well, thank fuck for that.

And, of course, if we had known about that law before we entered Nicaragua, I can just imagine the nerves and tension as we would have approached the border – Dunia, pretending to drive, sitting on the left, clutching a fake steering wheel fashioned from an old bucket, maybe, the dashboard hidden under a blanket. We’re on a trip around the world and there is no alternative to going through Nicaragua if you want to drive the Americas – you can’t just go back the other way. I’m so glad we didn’t do much route planning, researching the road ahead. If we had discovered Law 431, Art 165 what on earth would we have done? Let that be a lesson; a little naivety will get you a long way in this game: If anyone knows of any other country ahead of us that, too, forbids RHD vehicles – please keep the information to yourself – we don’t want to know.

So, having calmed down a bit, I got to thinking, why does Nicaragua have this law? A little shimmy around the www, of course, offers few answers. I suppose it’s because they think it’s dangerous – to be sitting on the right hand side of your vehicle, driving on the right hand side of the road, the kerbside whizzing past your right shoulder while your co-pilot (placed towards the centre of the carriageway) is in abject terror as you perform blind overtaking manoeuvres or keep to the centre line speeding round curves. Never mind that we have already driven 25000 miles in such a configuration; ignore the fact that, as a UK car-buyer spending every summer in Europe, such a configuration is normal for me.  Maybe the Nico authorities have little trust in their own people – completely losing it if they see a UK, Japanese or Australian built vehicle coming towards them. I don’t know – all I can say is that there was nothing strange, in this sense, about the country and we traversed without incident. 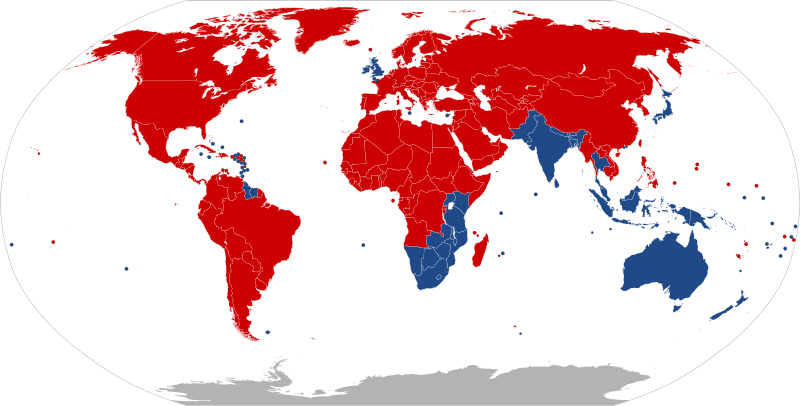 So, how is it, driving a RHD on the wrong side of the road? Well, you kind of get used to it. Of course, the biggest problem is overtaking – luckily in our old bus, that doesn’t happen too often. To perform a successful pass requires some coordination with your co-pilot in most cases but there are tricks that can help: If you find yourself stuck behind a slow-moving semi, allow a car to overtake you first and then when you see them going out, past the slow vehicle in front, you know that it’s safe to move to the left and have a look – any vehicle coming the other way is going to hit them first – you are safe; any trouble and you can nip back in: You are using this car to lead the way, to scout the safe moment when you can overtake. Another thing is that on a right hand curve, often it is you, sitting on the right hand side who has a better view of the road ahead; you can confidently move out where, if you were driving a “normal” car, you wouldn’t be able to see a thing.

There are other situations, such as at toll booths and those machines that dispense tickets as you enter a parking lot, where your co-pilot becomes indispensable. Also, of course, if you’re driving a bus or a camper, you’ll find your doors on the busy side and not by the sidewalk when you park. these are minor issues, surely. And there are advantages with being differently handed compared to all the other road-users: Consider driving a long a narrow road, whether a tight, city street or a mountain track. As a vehicle approaches the other way, you can check easily how close you can get to the edge by your shoulder – the other driver can check how close your two vehicles can be – you are, in fact, covered on both sides and can move along more fluently than if you were driving the same kind of vehicle as everyone else. I like to think that there’s an important point to be learnt here: Sometimes it pays to be different.

All these points hold equally for a left hand drive vehicle operating in a country where you must drive on the left. I imagine that the Germans have plenty of things to say about driving in places like India and Pakistan. Not to mention the problems driving a RHD vehicle on the left side of the road or vice-versa (i.e. the normal configuration in any given country) when you have spent your entire life doing the opposite – your hand that normally operates the gear shift now opens the door. And, of course, we have plenty of anecdotes in the UK about foreigners having problems on our roads. Hitch-hiking around England, I have been picked up more than once by a rattled, overseas visitor whose first question was, ‘do you have a driving licence?’ and just wanted me to chauffeur them around the place. The key thing, really, is that you get used to it. Talk to the Russians living in the Far East of their country who import vehicles from Japan. By the time you reach Vladivostok, every single vehicle bar the public buses, have their steering wheels on the right – even police cars, even, and this, of course, makes sense, the cars they learn how to drive in. Vladmir Putin, the eternal Russian president operating from European Russia once tried to ban these imports – he was refused by the locals who really couldn’t see any problem. They had the fortune to be living close to Japan and it’s enormous fleet of well-made but unwanted vehicles, why be dictated to from thousands of miles away simply because the Europeans found the situation bizarre?
Of course, the conversation turns to why there are some countries who drive on the left and some on the right. The answer is here.