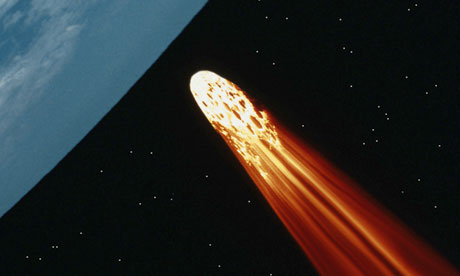 It just dawned on me that we won’t be going to Chixculub in the Yucatán Peninsula any time soon because we have, like, five minutes before our visa ends and we have to chop chop it over the Guatemala border. Well, there probably isn’t much to see anyway – maybe a plaque or something saying how this town was the centre of the crater formed by the comet/asteroid impact that wiped out the dinosaurs nearly 65 million years ago. Would have made a nice blog post, no?

But anyway! Right on cue a story surfaces on the internet about possible future impact mitigation -“Asteroid headed for Earth? Give it the laser treatment…“, which is all about the latest idea for avoiding the next collision coming our way sometime in the future; sending a swarm of spaceships equipped with lasers to rendez-vous with the unwanted rock and nudge out of the way of Earth’s path. Now this is a really great idea – just as great as the many other mitigation theories like mass drivers, painting it white and aiming nuclear missiles at it. The problem with all of them is actually we haven’t the technology to make it happen and we haven’t the information to guess whether it would work (or even worse – only half work)

So regarding the article; it would be nice to see an asteroid story without the mention of Bruce Willis in the first paragraph.

Anyway, a couple of issues that might be of interest:

1. Lasers, mass drivers, solar sail attachments and nuclear missiles are, of course, all untested when it comes to moving an object out of Earth’s way. The technology required is immense. And no government or organisation seems particularly interested in doing the R&D. Which is a shame because one day an asteroid/comet WILL impact and cause a right old mess the like of which humanity hasn’t seen for a while (think Noah’s Ark, rain for forty days, worldwide destruction and the collapse of civilisation to such an extent that the whole disaster becomes merely a long-lost myth that few believe could happen again).

2. The comments moaning about the weaponization of space have kind of got it half right. In fact, the asteroid/comet is the real weapon: Imagine the object is due to hit the Atlantic Ocean causing tsunamis that will wipeout the US East coast. Imagine then the lasers are sent up (or the missiles, or the solar sail attachments) but they only manage to move the asteroid half of the way required to miss Earth completely. Imagine, then, that ‘only half’ means the asteroid is due to hit Saudi Arabia instead. This is the big problem, first identified by Carl Sagan, that any impact mitigation attempt could do more harm than good.