The World in Hot Water

If taking a break from Panama City is a good thing to do; driving up to the cool of El Valle, around 200 klicks back west, and immersing yourself in the hot water pools of Anton Valley’s Agua Calientes, ranks as a very good thing to do. Some overlanders told us that some scientist living in the area believes the famous pools are, in fact, artificially heated and the mud, that you put on your face, is imported. Well, the water could do with a tad more heating, to be honest – and it wouldn’t be a bad thing that they wouldn’t be 100% naturally hot spring fed. I mean, sure, such waters are generally loaded with minerals and prized because of that – but the heat of the water is something else: All over the world, people like to get hot and wet. Whether that’s achieved electrically, by burning wood, pouring water on hot rocks or utilising the heat of the planet itself –  energy that derives from the web of gravity twisting and turning a billion billion tons of earth around the sun…

The universal custom of immersing the body in hot water, or the feeling of sweating liquid all over the skin, can be seen the world over. Saunas, of course, can be as dry as a Swedish bastu to as steamy as a Native American sweat lodge and on to the complete submersion of a hamam, jimjilbang or, indeed, a bath.

However, they all seem to serve the same purpose in society – to cleanse, heal and relax the mind, body and community.

Six notable hot water types of establishment from around the world:

Krazy Korean. The Korean jimjilbang comes in a wide variety of guises from neighbourhood bath house to 24-hour entertainment complex.  A good example of a modern establishment is the World Cup Stadium Spa tucked away under the World Cup Stadium in Seoul.  $7 buys entrance to the spa for 4 hours. First, you’re in the grooming, washing and heat treatment zone which is sexually segregated. Everyone is wandering around naked; first they have shower and relax in the hot tubs, dipping periodically into a cold pool. Here there is also infra-red dry rooms and big muscly people ready to give you a rub down or massage. After this, they spend a while having a shave, haircut, manicure, etc where most of the tools and products come free. Then you put on the orange shorts and t-shirt that you received on the way in and proceed to the mixed section where you have the chance to relax in front of the TV in a big communal room stretched out on the heated floor or upstairs reading something from the library. There’s also an internet (sorry, World of Warcraft Zone) and a canteen. For a few thousand Won more, you can even doze off and stay the night – some establishments even have communal sleeping rooms, bare, floor-heated rooms with wooden brick-shaped pillows. Basically people spend hours in there.

Spiritual Sweat Lodge. Coming from the native peoples of America, a sweat lodge is a tradition with great spiritual significance and ritual. In Central and South America it’s known as a temazcal and examples of have also been identified in ancient Greece, Ireland, in Celtic  lands and many other cultures. There are very few public sweat lodges of any kind because of the enormous ceremonial significance that they have – and the dangers involved in the extreme environments found within. Participation is usually by invitation and the emphasis will be on respecting the local traditions. Some will be held in silence, some with drums – some will be in darkness, some with a few candles. The ideas behind a sweat lodge have, of course, been adopted by certain New Age groups – a phenomenon criticised by some  indigenous and First Nations, welcomed by others. This uneasy appropriation reached its nadir when a few people died in an inadequately constructed and supervised sweat lodge at a retreat in Arizona in 2009 that occurred after the group had undergone various other extreme New Age practices such as fasting in the desert. 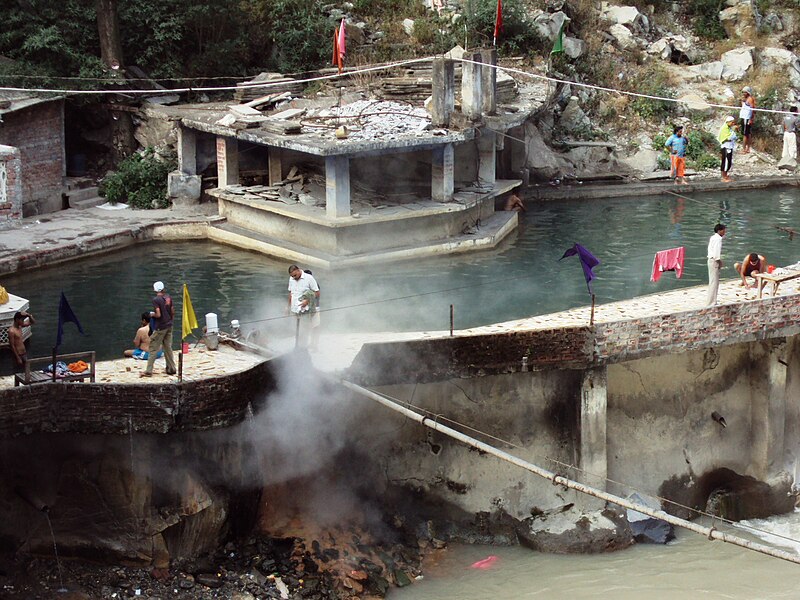 Hot spring fed. The most basic of hot baths found all over the world wherever geothermally heated water manages to bubble to the surface. The waters generally have a mineral content unique to that area and thus individual baths become renowned as having powers to heal. The best natural hot springs are located in a beautiful, remote area close by a river so that the extreme temperatures can be ameliorated by adding cold water, like the ones at Big Bend in California. For this purpose, stone pools are constructed at different levels down a gradient so that the water flows from bath to bath becoming cooler until it has fully mixed with the river or creek. (photo – and link to blog). This is what’s called a wild hot spring although plenty are now part of some establishment with proper buildings built over tiled pools and you couldn’t really tell if it was heated by man rather than the planet. The weirdest are the temples, where they worship the stuff. In Parvati Valley, Himachal Pradesh, India, the Hindus believe that the hot water results from the hissing of a serpent god, sent to pacify Shiva. The water there comes out hot enough to cook rice.

Scandanavian. The sauna, of course, is found everywhere but it’s the Scandinavian and Russian forms of it that people have in mind, when they think of people sitting inside a very hot wooden box. Traditional forms are heated up with smoke from a fire that is allowed to dissipate before people come in. Any lingering smoke is thought to be helpful, as is the gentle whipping of birch that they like so much in the Russian banyas.  Saunas in Germany and Austria are almost always same-sex, nude affairs – swim wear is usually the norm in other countries where males and females are together.

Hammam. The Muslim’s world form of sauna also focuses on actually getting clean; scrubbing and rinsing out the dust and dirt of a hot day…Water, and the large amounts of wood required to heat it, are valuable commodities in countries like Turkey, Egypt and Morocco – and you’ll find one of these communal bath houses in every neighbourhood., often attached to a bakery which shares the heat for its ovens. Inside a hammam, there are warm and cold rooms to help the body adjust its temperature but most of the action takes place in a central area where the people get clean. The scrubbing is particularly abrasive and you will lose a few layers of skin if you succumb to the attendants’ advances. If you’re tattooed, their unconscious aim may be to remove it. As you would expect, hammams are segregated, most usually men and women use the same facilities at different times of the day.

Go private. Of course, if you’re too shy to be partially or completely naked in front of others – maybe, it’s just a bit too weird to be suddenly doing your bathroom routine in public – do not fear that the benefits of the world in hot water are lost to you. Simply build your own; a little, electrically heated box in the shed or garage; a hot tub with jacuzzi controls for those who prefer an outdoor submersion under the stars; a DIY sweat-lodge  at the end of the garden. The point is that, even if you are alone, you’re doing something humans have always done all over the world…