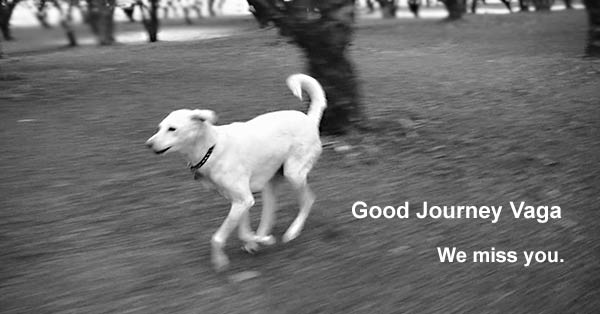 I’ll never forget the very first time Vaga came on board my truck. We were parked in Goa, India, on a cliff top overlooking the sea – a place where many puppies were dumped, where they had the chance to become beach dogs, to live among the tourists and travelers, to find a home among the restaurants and bars. Our fellow overlanders, who had brought two dogs of their own from Germany, had been feeding any strays that were hungry so we always had a small pack of puppies hanging around our trucks: Vaga was the only one who actually dared to go inside one of them. It was late at night and everyone was in bed except for me, sitting on the floor of our truck, reading. Suddenly, she kind of jumped in, taking all the steps at once, and landing in a heap by the hand brake. I froze and stared – she froze and stared back. But as I put the book down, she spun round and disappeared the way she had come.

Six months later, that same truck had brought her all the way back to Europe where she spent the next eight years pretty much always by my side – or, at least, asleep on the nearest sofa or maybe, even, somewhere at the same festival I was. And then three years ago she came with us  again for one last cruise into the sunset, a journey that took her half way round the world…

You know, I really don’t think a dog particularly cares whether it’s traveling to loads of countries or not. Sure, this traveling dog had the time of her life, a life most people could only imagine. Over thirty countries, a thousand changes in scenery and god knows how many smells. She especially seemed to like the tropical beaches; massive squats full of friendly animals; cities where every bus stop seems to have a freshly discarded fried chicken wing somewhere around and, of course, deep wintry landscapes where she could show off her winter coat. But for any dog the important thing in life is to be with you, to be there when you both sleep for the night and there when you wake up. That’s kind of the whole point to them.

For many years Vaga was just an Indian dog – her graceful behavior, pink nose and soft coat spoke something of her exotic background compared to the big, strong, playful breeds of Europe. And then, one day, I came across a website about Indogs or Indian Pariah dogs, otherwise known as the primitive dogs that you might find on the beaches and streets outside of the western world. I learnt that some people think of these dogs as almost a separate species to the more regular canine stock that has evolved into the varieties of modern breeds.

And then, with one last click, I reached wikipedia’s Rajalapayam page and it was like opening Vaga’s family album…

Vaga was certainly not a pure Rajapalayam. She was much smaller and more heavily built than these skinny hounds and she wasn’t albino. Temperament wise, she was less aggressive and got on well with other animals – traits that the street-surviving Indian Pariah dog has. But a couple of things stood out: they were less demonstrative of their affection to their owner and they didn’t like to be handled and touched, especially by strangers. Vaga was exactly like that.

There is growing appreciation for pariah dogs – I have read about many who have emigrated from India to be family pets and, at home, there is a pride in this intelligent breed, symbol of Indian heritage, over those fussy, fancy euro imports. Of course, sensible voices are often drowned out in the hubbub of that busy country and there are thousands upon thousands of neglected animals. Such a waste, I’ve always thought when the Indian Pariah makes the perfect, undemanding and intelligent companion. So I’m blessed to have rescued one  – time, soon, to go find another?